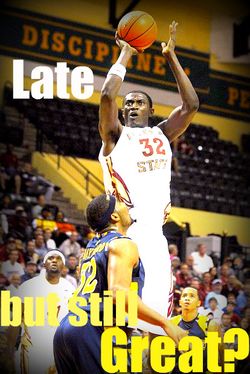 As we saw last night in the NBA draft, Solomon was surprisingly selected 50th in the draft by Dallas who traded him to Toronto not soon after picking him. Even the few mock drafts that had him going in the second round didn't have him going that low and most had him late in the first round.

Now it comes out from the Tallahassee Democrat that Solomon was diagnosed with a rare medical condition (that is not life threatening, thankfully) in the pre-draft physical exams which was shared with all NBA teams.

That obviously had an affect as to where he was drafted with teams shying away from him coupled with his leg injury two years ago. How much this condition affected his game we don't know. It sure didn't help.

So this helps to explain why he went so late. I can assure you that Leonard Hamilton and Stan Jones work very hard for their potential NBA players prior to the draft to get a good idea where players are likely to go in the draft. It was difficult to believe they could be so wrong.

Solomon just can't catch a break. But here's hoping he can stay on with Toronto or some other NBA team.

He was confident he was going in the first round when he declared last April.

In other FSU basketball draft news, Ryan Reid was a surprise pick going 57th to Indiana (later traded to Oklahoma). Ryan as early as early April had workouts scheduled with NBA teams and obviously someone liked with what they saw with his physical play and his willingness to do the dirty work. Will he stick in the NBA, who knows? But I will tell you this, Ryan is going to be missed by FSU fans more than they know come next season.

On a side note: Ryan in his senior year in high school went head to head against Stanley Robinson of UConn. Ryan had his hands full in that game and Robinson did get the better of him with Ryan eventually fouling out. Robinson garnered a good deal of attention while at UConn. Certainly more than Ryan did in his college career. Turns out Robinson was selected 59th two slots behind Ryan. I consider that a small piece of payback for that game six years ago.