What can a guy who played with Jerry Rice and Joe Montana teach kids about football? 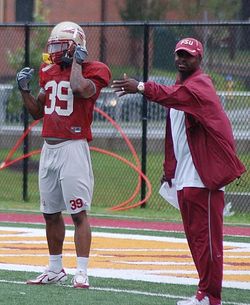 Apparently quite a lot about how to handle themselves on and off the field. That's the impression we got from talking with Dexter Carter. The former FSU and 49ers star, and ex-Seminole running back coach, is kicking off his first summer of football camps. Starting in his home town of Baxley, GA, Carter has camps scheduled for Savannah, suburban Atlanta and others to be announced.

We asked Carter about the idea behind his camps.

"It's another avenue to continue coaching -- doing it on my own terms and using all the aspects of coaching I've learned along the way. I call it 'From Pop Warner to the Pros.' While our camp is focused on developing football skills, it's not just about playing the game. We'll weave in motivation, self-esteem, and use football as a way to teach about life."

Who's the camp for?

"The camp is aimed at kids from 6 years old up to 17. All the way up to rising seniors. Every area I go to, I want to have a host school or host recreation department. When a recreation department is hosting we want to put the emphasis on six to nine year olds, and get the Pop Warner coaches out to participate with me. I can reiterate the things they've been teaching and add a few more things they haven't seen."

What skills will kids learn at the camp?

"It's an all-position camp. Some people might think that because of my background it's a running back camp. Absolutely not. For example, I played with two of the greatest quarterbacks ever in Joe Montana and Steve Young, and benefited from their quarterback coaches, Mike Holmgren and Mike Shanahan. Along the way, I've taken pride in looking, listening and learning. And that's with all the coaches I've been around, whether they were my position coach or not."

Where do coaches and parents interested in bringing a camp to their area get more information?