« What can a guy who played with Jerry Rice and Joe Montana teach kids about football? | Main | Doak summer facelift, Part 2: The Sod Squad »

Uh-oh, stretch marks. Looks like Doak is showing its age 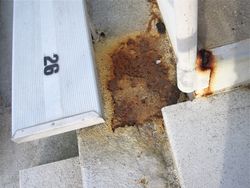 That rusty spot on the right was one of several we spotted during the spring game. An obvious sign that the 60-year old mother ship we know as Doak needs a little facelift before the Noles tee it up against Samford.

We spoke to one of FSU's Assistant Athletic Director, part of whose job is supervising athletic facilities, to find out what's in store for the stadium over the summer. His to-do list includes:

• Any topical rust will be re-coated. The steel deck, the original from the days when Doak was called the giant erector set, is a year or two away from a total re-paint. That job will take more than a year, because it’s done between April and August -- between the spring game and beginning of the season.

• An architectural firm will walk the stadium looking for problem areas and testing the integrity of the steel.

• Expansion joints will be covered top to bottom with an elastic compound.

• All seats numbers will be re-stenciled to make yours easier to find.

• Bathrooms will be cleaned and painted.

• Field lighting will be replaced where needed.

• Upgraded software is being installed for more colorful graphics on the digital ribbon scoreboards that were introduced in 2008.

• Improvements in the visitor's locker room.

As for the playing surface, check back in a few days for an update on how the grounds crew will be spending their summer.