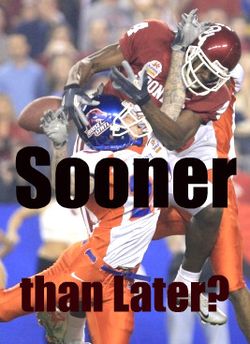 We continue our mild obsession with Oklahoma's secondary. Will it be a weak link in the OU defense on September 11th? A big key to the game is how soon new DB Coach Willie Martinez will develop them into an effective unit. Martinez himself recognized the challenge in this interview early in spring practice.

We asked Georgia beat writer Dave Hale (Macon Telegraph and Columbus Ledger) about Willie's abilities, regardless of the nose dive of the Dawg's D while Martinez was in charge. Here's Dave's answer (italics are ours):

"While most fans liked Willie in the early stages of his career, he wasn't exactly a fan favorite from Day 1 as DC. Making matters worse, the D seemed to decline virtually every year after that. The past two seasons, the secondary was actually Georgia's biggest weakness on D, so that was sort of a double-whammy for Willie, and fans let him know it. He was probably the most reviled man in Athens for most of 2009.

Still, I think he can be a good DBs coach, and his work with guys like Tra Battle, Tim Jennings, Sean Jones and Thomas Davis speaks to that. But during the past few years, he was often overmatched as a defensive strategist, and was probably not well suited to the DC role. His game planning was problematic and his adjustments were poor (see the Tennessee game in which Jonathan Crompton ran a click on the bootleg). More over, some of his better recruits in the secondary -- like Prince Miller, Bryan Evans and Reshad Jones -- failed to develop to their full ability. Martinez's coverage schemes are also based heavily on the idea that the front four gets pressure, and that was sort of hit-or-miss of late. The result was, too often, receivers running wide open downfield (see the Arkansas game last year).

So, I think Willie could be a solid addition to the Oklahoma staff in the role he's in, with plenty of talent to work with. But I can also tell you, I don't know of a single Georgia fan that was said to see him leave Athens."