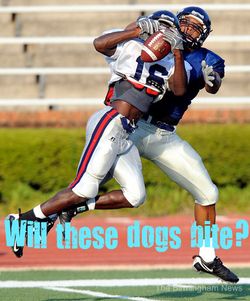 We talked to Samford's Defensive Coordinator, Bill D'Ottavio, who was about as non-committal as a politician during campaign season. Our take is that Bill hopes to preserve some slight advantage against FSU by using the element of surprise.

Keep in mind, though, there were no fleas on these Bulldogs last season when they opened against UCF. Samford played off the leash, losing by 28-24 on the Knights home turf.

D'Ottavio didn't have much to say about that game either in our conversation. See what you read between the lines in the following interchange.

Coach, what type of defense do you run so FSU fans will know what to look for?

D'Ottavio: "Uh, I think I may want to make them work a little harder to find that out (laughs). Let 'em do a little research."

You must be changing your scheme.

Do you have a lot of returning starters from last year's defense?

D'Ottavio: "We have some kids back, yes we do."

Who should we look for that will be anchoring the defense?

D'Ottavio: "I always hate to single kids out. But we have a few seniors. Our middle linebacker has been our leading tackler. A guy by the name of Bryce Smith. And we've got a couple of seniors up front that have played a lot of football for us. And a few seniors in the back end. We'll be counting on those guys to give us some leadership."

Do you have any starters who'll be out or doubtful because of injuries?

D'Ottavio: "I'm not commenting in that direction, if you don't mind. That's kind of a personal policy of mine."

Are the players looking forward to that first game?

D'Ottavio: "For us it's a step up and a tremendous challenge. It's a David and Goliath situation, I understand that. We're just gonna go through fall camp, prepare ourselves for the season and go out there and play as well as we possibly can. For us, when we play an ACC team, you know what you're getting into."

But in last year's opener you guys gave UCF a good scare. They only won by four points.

D'Ottavio: "Yeah, it was a pretty good football game. Our kids played hard and we did some things to give us a chance. We had the lead going into the third quarter and maybe even some of the fourth -- you know, the details kinda get fuzzy. But it was a good game. We were competitive and proud of our effort. But we didn't close it out."

I bet you've looked at film of Jacksonville State, a team in your league, that came close to beating FSU last year.

Another goal for Jimbo to shoot for in 2010 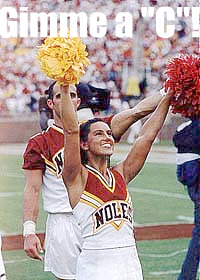 Consistency. Ironing out those highs and lows that FSU fans have learned to expect. Motivating players to bring their A game, every game.

Okay, that last one is about as realistic as Coach Coley switching to decaf. Guys are just not going to be as geeked up to play Virginia as they are to suit up against Miami in a nationally televised spectacle. What they must do, though, is progress emotionally beyond those Jekyll and Hyde mood swings that were so puzzling last year.

Take the Jacksonville State game -- please. (Yeah, it turns our stomachs a little, too, just to bring it up.) And don't blame the rain for that atrocity. Not when you score the go-ahead TD with 35 seconds left against a I-AA opponent.

It was a stinker that had Seminole fans ready to turn Mormon if it meant there was any hope of having a chance against BYU the following week. So what does the team that looked like the Keystone Kops against Jax State do? Drop-kicks the heavily favored Cougars all over Provo, ending their 18-game home win streak.

So now the Noles had found their mojo, right? Or so we all thought. USF came to Doak and, though the score wasn't as lopsided, embarrassed FSU as much as the Noles had humbled BYU a week earlier.

What the hell happened to the offense that rang up 54 points against the (then ranked) no. 7 team in the country!? It didn't show up in Boston, either, as FSU sleepwalked through nearly three quarters in losing to B.C.

Later in the season the cruise control attitude struck again. After thoroughly exorcising the curse of the Demon Deacons at Wake -- with a near-flawless performance by Manuel making his debut -- the Noles practically gift-wrapped a W to Maryland. As ugly wins go, this one was Medusa on her all-time worst bad hair day.

Continue reading "Another goal for Jimbo to shoot for in 2010 " »

Noles are #7 (and we're not talking pre-season rankings) When it comes to spring games, nobody beats Bama fans for a big turnout. But FSU's faithful showed up in surprising strength this year, thanks to a heady mixture of curiosity, hope and excitement. In fact, the Noles had the 7th biggest spring game crowd in D-1 football, according to Sports Business Daily. Not bad when you beat out Texas, Tennessee, Georgia and Virginia Tech -- and come within a whisker of matching the annual reptile gathering in The Swamp.

So that's what happened to Xavier Lee,
Neefy Moffett and Paul Griffin 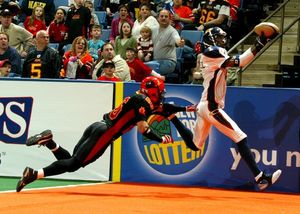 The Arena Football League is back in business after imploding and shutting down for 2009. And that means work for some former Noles who we were cheering a few short years ago.

The exception is Damiam Harrell, pictured above making an impossible catch for the Colorado Rush. Harrell had the bum luck to play for FSU when WRs like Peter Warrick and Ron Dugans were the go-to guys (although knee surgery didn't help in cracking the lineup). But Harrell blossomed in the indoor league. Even set an AFL season record for TD catches with 61, and was the league's 2006 Offensive Player of the Year.

Today Harrell is running routes for his sixth Arena League team, the Milwaukee Iron. And at 35 years old, well past realizing his dream of suiting up for an NFL team. Still, it's a paycheck and another chance to show he can burn much younger guys, as in the highlight photo. 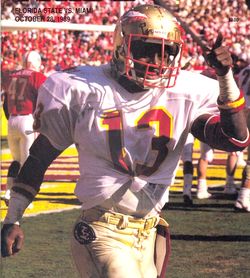 After three years on FSU's coaching staff, Seminole great Dexter Carter is going to camp. His own traveling football camp, that is. Check out Dexter's new website, "Dexter Carter's World of Football," announcing that he's open for business and ready to "conduct a youth football camp in your area."

We talked to his PR agent -- Karyn Bishop, a proud FSU grad and fan in Nashville -- who told us Dexter already has camps scheduled, including one in Panama City. She's also putting us in contact with Carter, so keep tuned for more details on his life after Florida State.

During his playing career in Tallahassee (1986-89), Carter was a Garnet & Gold Energizer Bunny, racking up 3,260 all purpose yards. He went on to play seven years in the NFL and sports a SuperBowl ring from his days with the 49ers.

Is there a weak link in the Sooner defense? 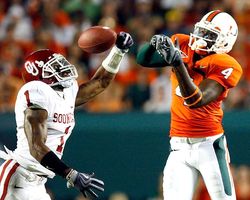 Here's the fifth in our series of Q & A's with Sooner blogger Allen Kenney of Blatant Homerism.

ChantRant: Talk about the experience and depth of OU's secondary and their ability to limit FSU's passing attack.

Allen:  "If you're looking for OU's biggest cause for concern going into the Florida State game, you've found it.

"With Brian Jackson graduating and Dominique Franks leaving early for the NFL, OU is replacing both of its starting cornerbacks. Sophomore Demontre Hurst, who saw plenty of run as a freshman, will get the call on one side. Junior Jamell Fleming is the leader for the other starting spot.

"Jonathan Nelson and Quinton Carter may form the best safety tandem in the country in 2010, so that's a big plus.

"Don't be surprised if the Sooners throw a lot of nickel packages and hybrid 4-3 looks at the Seminoles to give the corners a little bit of help." 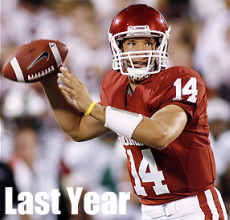 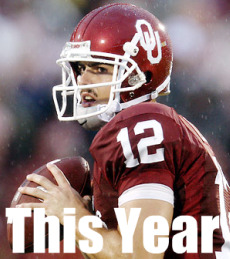 At least FSU won't be facing an NFL #1 draft pick this fall at Norman. QB Sam Bradford will be counting his millions and taking his lumps for the Rams. But how much firepower does the Sooners offense really lose with Landry Jones under center? In the fourth of our series with OU blogger Allen Kenney of Blatant Homerism, Allen gives us his Bradford-Jones comparison.

ChantRant: OU struggled some last year with Landry Jones taking over at QB. Did it prepare him to be more consistent? And as good or even better than Sam Bradford?

Allen: "Like many young quarterbacks, Jones' struggles came on the road, where he had a passer rating of 104, versus 161 in Norman. Factor in that three of those four road games were against Miami, Nebraska and Texas Tech, and drawing hard-and-fast conclusions about Jones' overall play last season becomes much harder.

"All things being equal, I don't see how Jones doesn't take some big steps forward this season. Will he be able to match Sam Bradford's level of play? No. But if Bradford was a 10, OU only needs about a 7 out of Jones to be a very good team. Last year, I'd say he was a 5.5."