« FSU O-Lineman just one of the future stars in the greatest game you probably never saw | Main | Noles Up North: Six hope to stick through CFL pre-season camps » 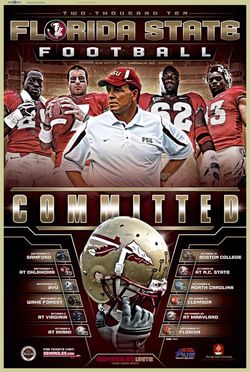 Super job by Geoffrey Rogers of Old Hat Creative. We spoke to Geoffrey, who told us the poster is part of a package of materials Old Hat will be doing for FSU.

But why is the Noles' major image piece of the 2010 campaign being designed and produced in Norman, the home of the University of Oklahoma?

Apparently, it's part of an ongoing trend to outsource. This isn't the first creative that Old Hat has done for FSU. Todd Adams, Old Hat's Print Production Manager, is an FSU grad and formerly worked in the Noles sports marketing department. He told us that the "FSU-Old Hat contact was there" when he was working for Florida State.

Rogers, the poster's designer, said he's not an OU loyalist and only attended the school for a semester. He also emphasized that the Old Hat crew is "from all over: Nebraska, Oregon and other schools," although the design firm's founder, Zac Logsdon , is an Oklahoma grad.

Here's our quibble. We can't argue with FSU's move to outsource creative work (though, ironically OU's own design projects are executed in-house). And it's obvious Old Hat does outstanding work, with an emphasis on college sports marketing.

No, our question is why this work is going out of state? There's a wealth of creative talent in Florida, from funky design studios to major ad agencies. Undoubtedly some with FSU grads at the helm and on staff.

Florida State athletics wouldn't survive without the support of its fans and boosters. Shouldn't that be a two-way street, in the sense of true win-win, quid pro quo reciprocity?