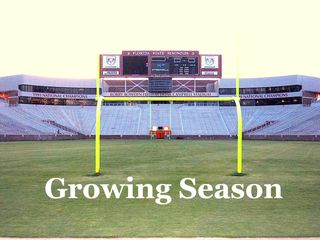 Long before the Noles tee it up this fall, another team takes the field. Victory for them is a perfect playing surface that can take the abuse of hard-nosed football and harsh weather.

Of course, we're talking about the grounds crew responsible for Bobby Bowden Field. And this year, they'll be busier than usual.

While the crew re-sodded last year, the roots never had a chance to grow deep. Then an unusually cold winter laid waste to the immature root system. So a field that was supposed to last five years or more -- the normal life span -- is being completely replaced.

By the time you see it in September, Doak's carpet will be lush and green -- nothing like the patchy coverage you saw at the spring game.

The grass the Noles do battle on is a hybrid Bermuda (no. 419 Tiftway Bermuda for any lawn geeks out there). And once the new crop grows in, it’s pampered like a newborn -- fed, watered and fussed over. Because it loves hot weather, the turf is cut three times a week through the summer and early fall.

During the season the crew does some spot re-seeding where needed. Usually that’s where paint is laid down the thickest -- the end zone and Seminole head logo at midfield. The sun is especially hard on the Garnet and black paint, baking it into the grass and choking it off at the roots.

We asked about the the old pump drainage system to draw water off the turf during heavy rains. The Assistant A/D in charge of the field told us it was totally replaced in 2004 after the old system failed during the 2003 Miami game. Remember that soggy mess when both teams turned the ball over five times?

Never again, if FSU's sod squad has anything to do with it.