« Life After Alabi: Can the Noles rebound from losing their big man? | Main | Which Stoops brother will outsmart the other this September in Norman? »

Why no TV of Oklahoma's spring game?
Bob Stoops wants to keep "everybody in
the dark" 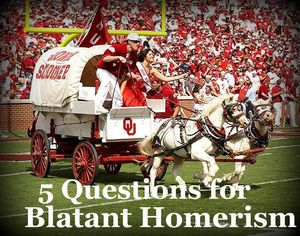 Because FSU's first real test of 2010 will be a Battle of the Titans-like showdown in Norman, we're doing a series of Q & A's with Oklahoma Sooner savant, Allen Kenney at Blatant Homerism. Here's the first.

ChantRant: Why did Bob Stoops not allow TV of the spring game? Was it to keep FSU in the dark about what OU will do in the fall?

Allen:  "It doesn't seem that long ago that OU was hosting the ESPN crew at the Red-White Game and opening up some scrimmages and practices for fans. Ever since the Rhett Bomar fiasco, though, Stoops seems to have taken a much more guarded stance towards who has access to the program.

"He hasn't allowed TV at the last three spring games, for instance, and scrimmages have been closed to both the public and the media. You've got a better chance of getting Stoops to kiss Mack Brown's butt than you do of him allowing you to watch an entire practice.

"So, no TV at the spring game has become standard operating procedure under Stoops. When asked about all the secrecy, he usually responds with something to the effect that he doesn't see the point in giving everyone a look at what OU is up to. It's not specifically aimed at FSU; it's really about keeping everyone in the dark."