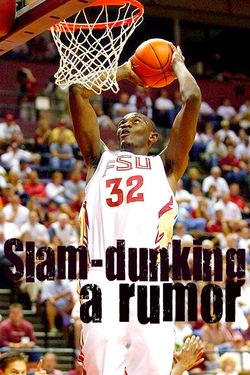 Keep tuned for the second part of our series on a real spring game as we bring you Bill from Tampa's take on today's biggest story in Seminole sports.

Even before this past season started there has been rampant speculation surrounding Solomon Alabi and whether he will declare himself eligible for the NBA draft this June.

That talk has escalated since the end of the season so much so that there have been reports on the internet and local media in Tallahassee that Solomon has decided to turn pro.

Solomon has NOT decided anything at all. I'm not saying he isn't thinking about it, because he is. He successfully never allowed himself to think about that possibility during the season. But now he has the time to explore what his possibilities are. But in no way has he made any kind of decision as of this time.

He may very well announce something next week (he has until April 25th). But any reports that he declared for the draft are incorrect.

A Cure for the Common Spring Game 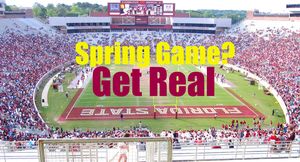 Congrats to Seminole coaches and players for the best spring game since Chris Weinke had hair. And to the 51,000 fans who rivaled the turnout at Reptile-Land (a.k.a. Florida Field, Benny Hill Stadium).

One of the biggest reasons that Doak looked almost like game day was the format. They played something that resembled a 4-quarter game this year, not a ho-hum scrimmage with a points system as easy to understand as the tax code.

But what’s better than an actual game to conclude spring practice?

A real game. Against a real opponent.

We admit it’s not an original idea. Every few years the concept is run up the flag pole to see if anybody salutes. But the time is riper than ever to take a serious look at a spring game that goes beyond a Garnet team versus the Gold.

Why’s that you say? Glad you asked.

• Dollars and cents. With FSU’s athletic budget stretched, like most schools, a real spring game would deliver a welcome cash infusion. Not that ticket prices would require a second mortgage. We’re thinking $25 a head. That’s with open seating like the current game. Wouldn’t you pay $25 to see the Noles strap it on to play another D-1 team in April?

• A real fan event. As fun as last week’s G&G game was, there was a lot missing. Like the excitement that ramps up all week before a real game. That heart-pounding thrill of walking into Doak when it’s rocking with anticipation. You'd get that in a real spring game. And whatever the final score, post-game buzz oughta keep fan spirit going strong through the long summer when time seems to stand still.

• A higher level of competition. Just as with the finish of pre-season practice, at the end of spring players are ready to go against somebody -- anybody -- besides teammates. Imagine the added intensity of FSU’s first-stringers lining up against the one’s from another D-1 school. Especially with a large TV audience (at least regional) making it a showcase. BTW, that TV money is another source of incremental bucks to help support all of FSU’s non-revenue sports.

So what team would be the ideal annual opponent for a home-and-home spring game series? Check back tomorrow for the school we believe would be a perfect fit.

As seen at the Garnet & Gold Game: Part 2 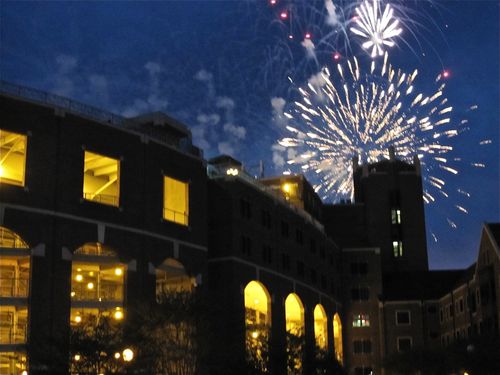 A symbol of things to come, as FSU fans expect to see fireworks on the field this fall. 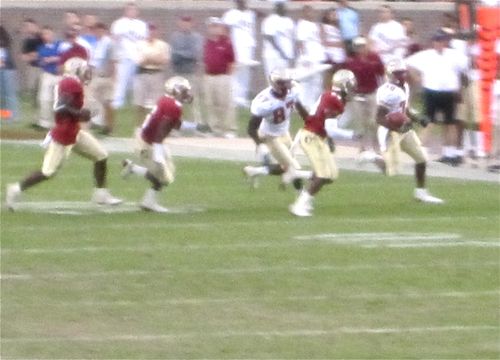 J.T. showed showed flashes of what a 1000-yd. rusher looks like. 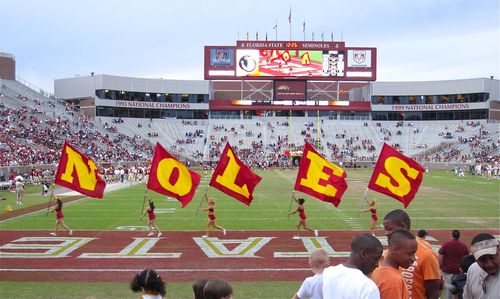 Some who performed on Saturday were already
in mid-season form. 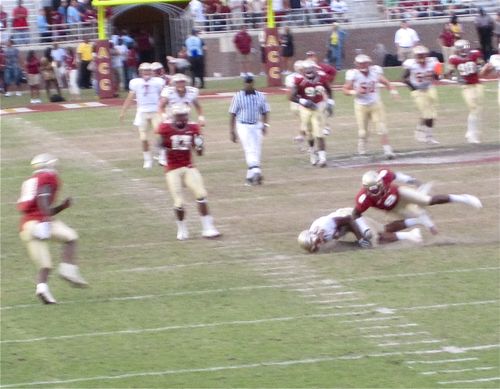 Demps serves notice FSU has a headhunter at Safety again. 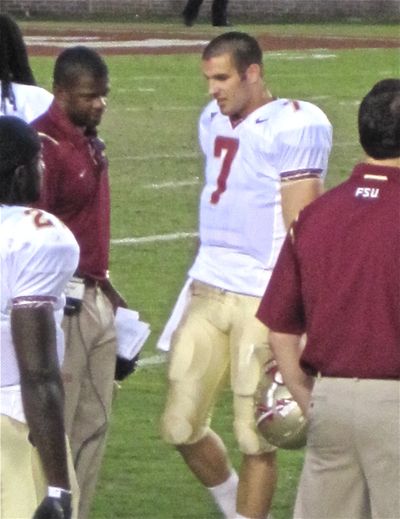 Weinke made his Doak encore. 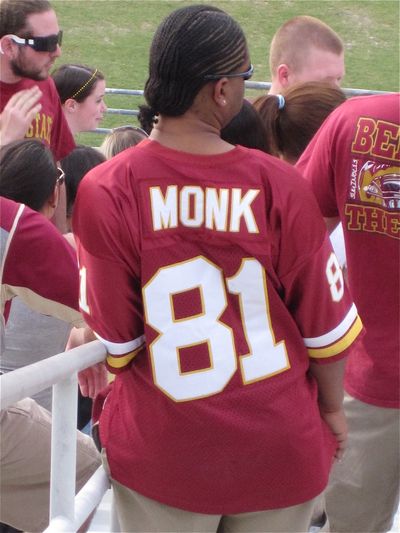 FSU fans did a double-take. But no, it wasn't Brenda. 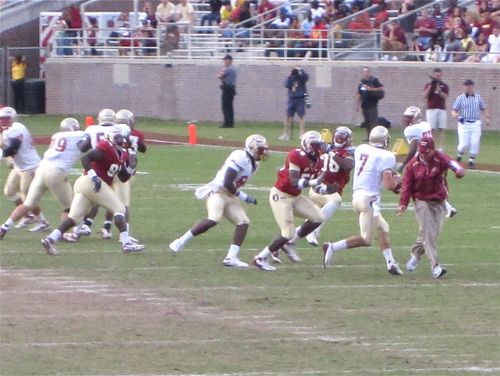 Oh, the irony. Here's Christian Ponder -- just months from a painful injury -- rolling out to heave it, and coming within an inch of putting Jimbo in traction (far right above). Fisher was coaching on field through most of the game, but may reconsider next year after this close call.

Now back to our regularly scheduled photo gallery of FSU's spring game. 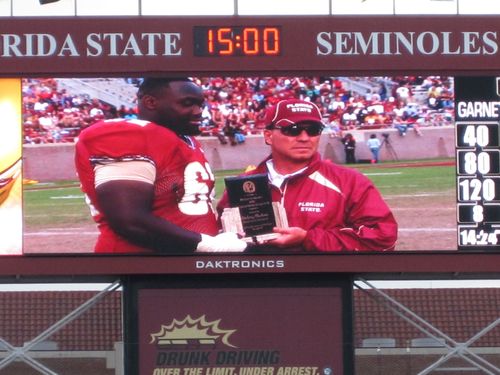 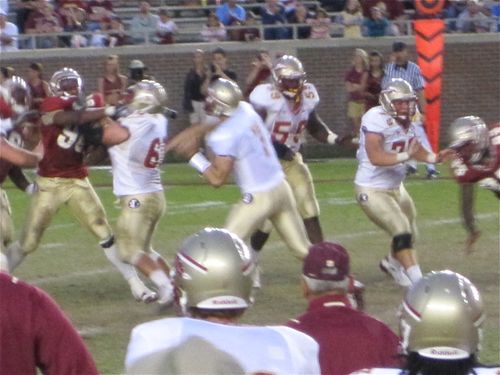 Coach Trickett (bottom, between two players) is smiling inside over the protection his guys provide for #7.

Bring an Autograph Book to the Spring Game 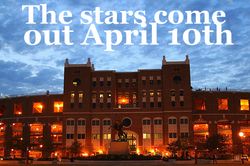 FSU is going the extra mile to make this the Mother of all Spring Games. Besides the menu of pre- and post-game hoopla, get a load of the Who's-Who of former Seminole stars scheduled to play in the halftime flag football game.

Competing at QB will be the guys who were...well, competing at QB way back 20-something years ago. Of course, that would be Brad Johnson and Casey Weldon.

Rumor has it that the ghost of Fred "The Head" Miller may also be taking his place among all those assembled stars.