« Bill from Tampa explains Alabi's decision | Main | Life After Alabi: Can the Noles rebound from losing their big man? »

FSU in a white helmet? As the Soprano's would say: "Faagheditaboutitttttt!" 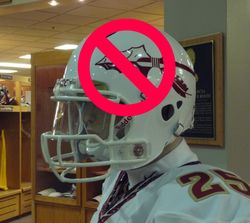 Geez, the message board buzz on those crude locker room photos of a Seminole spear on a white helmet. The comments flew faster than anything about PRob drafted in the first round.

Well, it's been a fun little diversion. But forget about seeing it this season at Norman, Doak, or anywhere else in the foreseeable future.

At least that's the word from Bob Thomas, Assoc. Director of Media Relations.

Bob told us the helmet was "just ordered to dress up a few mannequins in multiple mix 'n match uniform combinations to show recruits." Sort of like a concept car that never makes it to a showroom.

So who took the photos we saw on the web? "Stuff shot by kids who paraded through the locker room," says Bob, "and probably with a cellphone camera" (which explains the awful clarity and color of the shots).

Bob added that if FSU was introducing new uniform combos, it certainly wouldn't be through the digital backdoor of somebody's social networking page.

But the most telling thing for Nole fans that we heard from Bob was this: "Jimbo favors the traditional uniform."