« A Nole fan's guide to Clemson's Death Valley | Main | FSU in a white helmet? As the Soprano's would say: "Faagheditaboutitttttt!" » 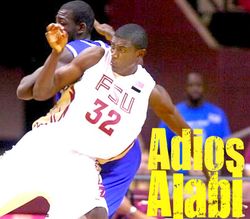 Despite reports from various internet sites that it was determined last week, this time the news that Solomon Alabi will enter the his name into the draft is legitimate.

And frankly it is not unexpected that he would declare. He's a little older than many players. He's had injury issues. Most draft services have him in the first round noting that Solomon has improved his play each year.

But more importantly than that, you can bet that Leonard Hamilton has looked into this a lot for him. And by the way, that process by Hamilton to assess Alabi's draft position did not start until within the last week (again contrary to various internet reports). Alabi has done everything the staff has asked of him so the level of trust in Hamilton to do what's in Solomon's best interest is unquestionable.

So good luck, Solomon. Obviously Seminole fans will miss seeing you play at the civic center for a couple of more years.