« Looking for a few tips before the tip-off? | Main | FSU Women’s Basketball: The Best Team You're Not Watching »

Why FSU shouldn't promote Christian Ponder as a Heisman Candidate 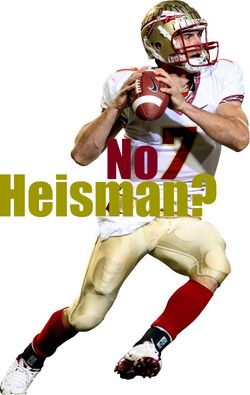 As spring practice began for the Florida State Seminoles, Junior QB Christian Ponder was back under center, after a shoulder injury took away the rest of his 2009 season. Stronger and bigger than last season, Ponder was one of the few bright spots for FSU in their dismal 2009, with numbers rivaling that of the top Quarterback award winners.

His role as the face of Florida State, combined with impressive 2009 statistics (2,717 yards, 14 touchdowns, four games with 300+ throwing yards), is a big reason why Head Coach Jimbo Fisher said he would support a Ponder for Heisman campaign.

Now, do I think Ponder potentially could earn the Heisman trophy? Yes. In fact, I think, if his 2009 performance is any indication, Ponder will earn at least All-ACC and a finalist slot for the Davey O’Brien Award and the Johnny Unitas Golden Arm Award. If his numbers improve, and early reports would say it will, then All-American and a postseason award are all but guaranteed.

However, a Heisman trophy campaign requires more than just throwing the ball and leading the Seminoles to victory. There is a huge level of media scrutiny that comes along with it. Does Ponder have what it takes to deal with the pressure? Yes. Does the rest of the Florida State squad? Not so much.


Florida States' players and coaches are in a rebuilding mode right now. With a completely transformed defensive staff, and a few new pieces on offense, the team is just trying to adjust to new techniques and work out all the kinks right now. It will still be six months before anyone gets to see this team in action, but a Heisman campaign has to be started well in advance.
A Heisman campaign would put extra pressure on the offense around Ponder. The running game is still trying to find its breakout back among the bunch, and every fumble and dropped catch would be amplified. Same with the wide receiver corps. Amplifying miscues by young players as the media focuses themselves on Ponder’s every step for the nation’s biggest award could really affect focus and confidence as the season wears on.

The biggest factor, however, is that a Heisman candidate has to have his team in contention for a national championship. Every Heisman trophy winner since 2003 has led his team to the BCS Championship. Florida State, while a good team, is not at that level yet.

This is a rebuilding squad with a brand new coaching staff. With the talent they currently have, an ACC Championship and getting back to a BCS Bowl Game is a logical goal to reach for.  The team is still a step or two away from that higher perch.

A rebuilding squad coming off of some bad seasons and a new coaching staff do not make National Champions. Not being in contention for a National Championship does not make a Heisman Trophy Contender.  Ponder would be wise in telling FSU that, while an honor, FSU should not market him, instead allowing the team to focus on the season that lays ahead and learn their new systems in the hopes of fielding a competitive team, one fans have sorely missed. Besides, when was the last time a Heisman Trophy winner became an NFL star?