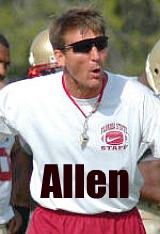 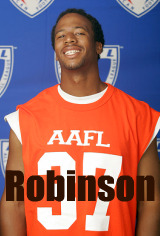 Looks like Allen will outrank Colzie, though, as he wangled the extra title of Associate Head Coach.

Robinson the latest former Nole. Add another familiar name to the growing list at UWG. On Thursday Dominic Robinson was announced as the team's wide receivers coach. Robinson had 42 catches and two TDs during his FSU career (2001-04). Seminole fans will remember D-Rob most for his clutch catch that set up the winning TD throw that beat the gators in 2003.

And the head coach doing all the hiring? Daryl Dickey, the much maligned former FSU QB Coach from 2001 thru 2006. Under Dickey, who's also the school's A.D., West Georgia has won one game during the past two seasons.