« Jimbo unplugged: " I can’t be Bobby Bowden. I can’t be Nick Saban. I can’t be Les Miles." | Main | Why FSU shouldn't promote Christian Ponder as a Heisman Candidate »

Looking for a few tips before the tip-off? 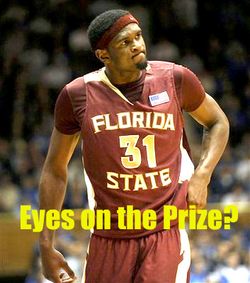 FSU's first round playoff destination is as uninspiring as the team's performance last week in being ousted from the ACC tournament.

Buffalo. In March. And against a Gonzaga team with far more history and success in the NCAA tourney than the Noles.

Tip #1: The Zags have made the big dance for the past eleven years in a row. Eight of those years they've advanced to the second round, and five times to the Sweet Sixteen. Back in 1999 they even made it to the Elite Eight against UConn. Advantage: Gonzaga.

Tip #2: If you're a betting man, here's what Vegas is telling you about Friday night's matchup.

Tip #3: No Jet Lag for the Zags. Flying through three time zones the day before the game could have been a possible advantage for FSU. No such luck. Gonzaga's charter flight lifted off early Wednesday morning from Spokane to Buffalo, giving the team Thursday to shake off any cobwebs.

Tip #4: The mental edge. Will Gonzaga players be distracted and give less than their best performance because their head coach may be quitting for a bigger school and a fatter paycheck? In fact, two Zags assistants are also rumored to be leaving for greener pastures. Possible advantage: FSU.

Tip #5: Here's what our roundball analyst Bill from Tampa says after looking into his crystal ball:

"FSU will win the game if they take care of the ball and avoid having possessions end with needless, unforced turnovers. FSU will lose
if they do not contain Gonzaga's efficient offense and let either Elias Harris or Matt Bouldin have big games."