« FSU is One and Done in Greensboro | Main | Looking for a few tips before the tip-off? » 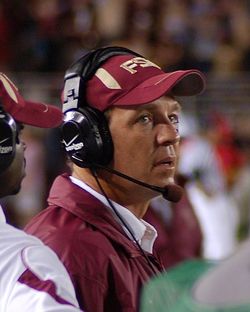 FSU's new limited media access puts the spotlight on Jimbo, though it doesn't often allow for him to open up with answers beyond press conference-type soundbites. But we heard some deeper insights in this recent podcast. Fisher got into behind-the-scenes stuff about discipline, player development, mental conditioning, and his transition to being the new chief on the Seminole reservation. Here are the highlights:

On making the transition from offensive coach to head coach.

On what he’s learned as an assistant under several great coaches.

JF: “The biggest thing I’ve been able to take away from all of them is, I’ve gotta be Jimbo Fisher. I can’t be Bobby Bowden. I can’t be Nick Saban. I can’t be Les Miles. I can’t be Terry Bowden.”

What can FSU fans expect to see that may be new to them?

JF: “I think a lot of it is behind the scenes in our player development. I think that’s an area in which we really need to grow in. And we made changes in the weight room and we’re doing things in practice. Just in the development around the players, the core programs around them, from the academic world, to the strength world to the mental conditioning world. All those different facets are the big things we’re trying to change from within on a day-to-day basis so we see the results once they hit the field.”

JF: “It's getting kids to understand when they fail, why they fail, how to fix it. And more importantly maybe than that is when they succeed -- some guys succeed and don’t know why they succeeded -- of why they’re succeeding, so they can develop consistency in their performance. And that’s the edge we’re trying to attack right now.”

On having an infrastructure to deal with discipline.

JF: “We let our players do it. We build a unity council around them and our top 12 to 15 guys on the team. They set a lot of punishments and a lot of standards for the way things are going to be done, and they can patrol from within…And it’s worked real well. Because, you know the greatest pressure you face is peer pressure. Well, what we’re trying to do is flip the peer pressure. We’re trying to flip it where they don’t want to be in front of the guys. And reinforce the guys who do it right…and you let those
guys run the team. Not the guys who are the problem, who always cause the chaos.”

On his sales pitch to recruits.

JF: “We’re trying to develop you as a person…as a human being. Learning the two most important abilities you have as a person: dependability and accountability. Helping reinforce that in our program. How we hold you to a higher standard. The way we hold you accountable for everything you do…And you’re held to that not only from us, but from each player in our organization…But the big thing there is showing them how we have a plan for each individual as a person. So there is a plan for not only ball, but your life after ball.”