FSU Women’s Basketball: The Best Team You're Not Watching 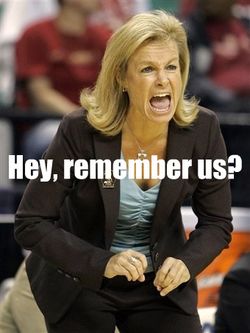 A top ten program year in and year out, two straight ACC Regular Season Championships, six straight years of postseason play, and multiple post-season All-ACC awards. Do you know who this squad is?

This is the FSU Women’s Basketball squad, that has redefined consistency at Florida State.

Led by three time ACC Coach of The Year Sue Semrau, the women’s basketball program has begun to gather fear and respect, much like other top-tier basketball programs including Duke and North Carolina. In fact, FSU’s program has garnered enough respect, that it has earned a #3 seed in the Womens NCAA Tournament for two years in a row.

Even though the program has reached a glass ceiling in the tournament, they have won their opening round game every year during their current six-year appearance streak. 2007 saw the program reach the Sweet 16 for the first time in school history.

FSUs Lady Seminole squad only gets so much success in the postseason thanks to dominance in the regular season. 2008-09 saw FSU claim it’s first ever ACC Regular Season Championship, where they went 12-2 in conference play (7-0 on the road). The team backed that up with another ACC Regular Season Championship this past season, again with a 12-2 conference record, including a perfect 7-0 at home.

This past season truly showed how far the FSU Lady Seminoles have come. They reached the highest spot in the polls in school history (sixth on December 14th and March 1st), after starting at their previous highest ranking (12th). For the second straight season, they were picked to finish third in the ACC, behind perennial powers Duke and North Carolina. Simply put, FSU Women’s Basketball is the epitome and model of a successful program that breaks records and wins games.

So where is everyone? The past two seasons have been the best for the ladies in Garnet and Gold, yet the fans are missing out. The Donald L. Tucker Center is set to seat 13,800. The 2008-09 squad averaged  4035 fans a game for seven home games. The 2009-2010 squad, which was even better than the previous season, averaged a little more than half that, at 2,899 fans a game.

Let’s compare it to the Men’s Basketball program, which reached the NCAA Tournament the past two years in a row, but has not won any ACC Championships. The 2008-09 squad, which saw the Seminoles reach the NCAA for the first time since 1998, averaged 9,902 fans a game. The 2009-10 team averaged a little less, coming in at 9,079 fans a game.

Our women’s program begins their march towards the National Championship right in their own backyard at the Donald L. Tucker Center, with their first game March 20th at 2:30 PM. If you cannot be there, it will be on ESPN.

This is the time for FSU fans to get themselves out and go see one of the most consistent programs the school has seen in the past six seasons. They are in their highest seeding, two wins away from tying the most in school history, and are playing on a national stage. Now is the time to get out there, while they are playing at home, show them the Seminole Pride, and help start a following that can roll into the 2010-11 season.

It takes a special individual to make it to the college level, and for the past six seasons, FSU Women’s Basketball has had a number of those individuals. Take it upon yourself to see them before its too late.