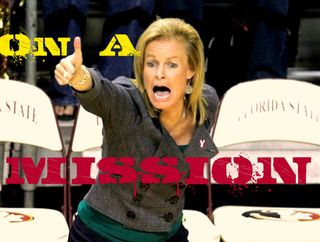 Boston Celtics Forward Kevin Garnett said “Anything Is Possible” after winning his first NBA Championship. He obviously was not going up against the ladies of the Connecticut Huskies basketball program.

The UConn Lady Huskies are currently in the midst of the longest winning streak in Division-1 Women’s Basketball history (75 wins and counting). Not only did this squad beat the record, but it was a record they set themselves, with their 2001-2003 team; a team Head Coach Geno Aurriema said was better than the current record holders.

When a team wins each of its games by an average of 32 points, and the closest victory was a 12 point game, I don’t know how much better one team could get. In the NCAA Tournament this season, they have won each game by an average margin of 49, and seem poised to advance very handily against a Florida State squad they already beat once.

Yes, FSU is merely a number on UConn’s streak, losing by 19 points in a December showdown. Even though it was only a 41-35 game at halftime, as always, UConn found a way to win, and win handily.

However, FSU has a chance to win, albeit as small as their average margin of victory over their last two games (two points). But this is an FSU team that is walking on air right now, soaking up the joy of their first Elite Eight appearance. As they say in Vegas, FSU is playing with house money at this point.

So how does one stop the best team in the nation? With these simple steps:

CUT THE HEAD OFF THE SNAKE

Who is the head in the snake of UConn? Senior Center Tina Charles. The 6-4 leader was amazing in putting FSU away during their first matchup, scoring 16 of her team-leading 24 in the second half. For the season, she’s averaged 18.3 points and 9.3 rebounds. She is a smart, knowledgeable player, capable of taking the ball in her hands and leading a team to victory. In their first matchup, UConn scored 46 of 78 (58%) of their points in the paint, a direct result from Charles’s efforts.

The ability to stop her will fall squarely on Sophomore Center Cierra Bravard. No slouch herself at 6-4, she suffered from foul trouble in the first game and was highly inefficient. With most of the focus on Forward Jacinta Monroe (more on her later), this game has the ability to be a huge coming-out party for Bravard. FSU has had some strong women down low in the past, and a solid effort against Charles will be the start for Bravard.

DON’T TURN THE BALL OVER

Easy enough, right? Last time the two teams met, FSU turned the ball over 21 times, which gave UConn a 10 point swing in Points Off Turnovers. Against the best team in the nation, mistakes will happen, but they have to be minimal, and not cause a huge swing like this.

FSU averages approximately 18 turnovers a game, but they will need to be smart with their passes, and be aware of their surroundings at all times. Good teams don’t make bad mistakes.

Senior Forward Jacinta Monroe is FSUs best player this season, bar none. She leads the team in points, rebounds, and blocks. She is a menace both up and down the court, and everyone knows this. Last time the two teams met, Monroe led FSU with 14 points and five blocks. UConn will be ready for her, so this time, FSU needs to have a second player, and possibly third, prepared to take the team and lead them to victory. My pick is Junior Guard Courtney Ward. A pure point guard, she leads the team in assists, steals, and is third in points and second in three-point percentage. Ward has played the most minutes for FSU, and needs to be ready to take over from the outside if Monroe begins struggling. FSU has a number of quality role players outside of Monroe, and all need to step up their game and contribute if victory is possible.

Is a win impossible? No. Is it improbable? Possibly. FSU has had an advantage the other teams UConn has faced in the tournament have not, and that’s real experience against this squad. Many people are writing off FSU and giving the win to UConn already. If FSU shows up, and plays the perfect game, well, then, anything would be possible.