FSU is One and Done in Greensboro 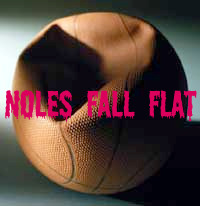 I’ll keep this brief and to the point.

Of Florida State’s nine losses this season, Friday night’s 58-52 loss to North Carolina State is in my opinion the worse loss of the season.

Why do I say that? The mistakes made tonight mirror exactly the very same mistakes this team made in the first week of the season. Thirty-one games played with a week to prepare and FSU still looked like a team in its first week of practice much of the time.

The most prominent of those mistakes were the 20 turnovers the Seminoles garnered, giving the Wolfpack 16 easy points. Leonard Hamilton likes to say we invent ways to give the ball away. Well, he would be dead on with that comment about this game.

Just ludicrous turnovers like throwing the ball too low to a teammate and bouncing it off his foot and out of bounds. Getting a rebound and flipping it causally to another player -- that player unfortunately being the opponent. Throwing a pass way wiiiiiiiide of your mark and you weren’t even being defended on the play. Throwing a pass to nobody, things like that.

Then there was free throw shooting, or the lack thereof. Aside from not getting to the line enough in the first place the ‘Noles had another horrid game from the stripe, shooting 9 of 17. Andy Enfield, FSU’s shooting guru has his work cut out for him for this to improve for next season. Assuming he can, that is, because it is going to have to be up to the players to fix what has become a huge issue.

Then there was Scott Wood, who once again burned FSU with 6, that’s SIX three pointers out of ten attempts for 18 points. The combined total for Wood against FSU is 13 of 21 threes and 49 total points.

So why, after getting scorched for 31 in the first game did the coaching staff come out with the very same defensive assignment on Wood?? That worked out real well didn’t it. And by the time the adjustment was made in who was guarding Wood, it was way too late as the Pack held a nine point advantage, 46-37, with fourteen minutes left to play.

And lastly there is that offense, or what is supposedly an offense, because whatever it is FSU is trying to do frankly is bumfuzzling (as Bobby Bowden would say). For whatever reasons, this team will not throw the ball into the post player. FSU looks like they will throw it in there but hesitates, missing that split second opportunity to do so. By then it is too late and the ‘Noles settle for long jump shots.

Eighteen long jump shots, to be exact, of which FSU hit just three and just 39% from the floor overall.

So with the defeat by the third seeded ‘Noles to the eleventh seeded Wolfpack, FSU falls to 22-9, is one and done in the ACC tournament, sees its record in Greensboro fall to 1-8, and will wait for the selection show on Sunday to see where they will travel to. And it’s a good bet that it will be a lengthy destination as the best seed FSU can hope for now is probably a nine seed. When you lose twice to NC State and are 0-3 against the two top teams in the conference, anything better than a nine seed and the Seminoles can consider themselves extremely lucky.

I’ll just blame the loss on Florida State SID person Chuck Walsh missing his first game in 17 years due to the flu. Yeah, that’s why the team was off its game. That’s my story and I’m sticking to it.