The Boosters' message to fans about an indoor practice facility: Be patient 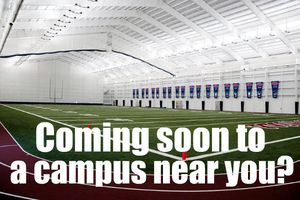 It's amazing how many FSU fans are eager for the football team to have an indoor practice facility. First, so players don't miss valuable practice time on rainy days in the early part of the season. Second, it's an expectation and a recruiting tool for top level programs. And, hey, the competition have 'em (UNC and Clemson, for example).

So we checked in again with Jerry Kutz, V.P. of Marketing for Seminole Boosters, for a forecast of when the Noles will have an indoor home of their own. Here's part one of that interview:

Jerry, when can FSU realistically expect an indoor practice facility?

Kutz: "It's a priority for Jimbo and something he definitely wants. We're optimistic that we're going to get it done. We've presented plans for the facility to several people. And we've had some donors who can make million dollar-type gifts -- that is, if we build it, they'll pledge it. But we're going to have to find a ten million dollar lead gift to kick it off. Or several five million dollar lead gifts. So it's just a matter of a couple of people stepping up. But we're definitely asking them. And Jimbo is actively involved in the fund raising. Of course, we're doing all this in the teeth of a horrible economy.

"Now, a project like this is enormously expensive. Plus, it doesn't generate any revenue to help pay for itself. Like when we built the stadium, the ticket revenue pays the cost of the bond issue. So it's a revenue producing facility. Skyboxes are the same way. You get a bond issue and then you go sign long-term leases that pay for the bond issue."

Will it help to retire current obligations like the payout to Jeff Bowden?

Kutz: "That's insignificant money in the grand scheme of things -- about $100,000 a year. And that's coming out of concession revenue or something. Also, the bond issues on the stadium are a 30-year deal, and we're only about ten years into those."


How much would an indoor facility cost?

Kutz: "Some people say between 25 and 30 million dollars. What we're looking into is if the facility can be used partly for academic purposes. For example, if it was used half of the time by Physical Ed. and Student Recreation for intramurals. Then we could go to the state and ask for half of it to be financed by state dollars. But the problem there is, the state of Florida doesn't have the money right now to be funding those kinds of projects.

"We could build one for around 10 to 12 million. But it would be a white elephant on our campus. Because it's so big it's going to be the most obvious building on campus. It can't be just a big Butler Building. Because we're trying to maintain the architectural integrity of the campus, now you need to integrate brick into it, and what kind of roof we'll put on it, and the cost goes up."