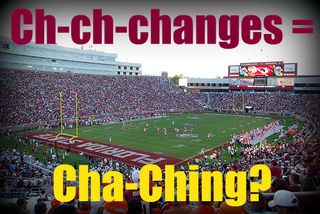 "People who like change jump on quick," says Jerry Kutz, Seminole Booster V.P. of Marketing and Communications. So Kutz certainly likes what he sees so far in early Booster commitments. But as someone who's a veteran of beating the drum and hoping for a good response, he's not even close to saying "Mission Accomplished." Not until six months from now, when he has a clear picture of the collective mood of the Seminole nation, reflected in ticket sales and Booster pledges.

Here's a current snapshot of the Booster situation from our Friday update with Kutz.

"Right now everything is positive. Our numbers are up but we're only one month into the renewal cycle. Last year on January 25th we had about 1,100 of our 13,000-plus members renewed. And as of January 25th this year we had 2,100. That's an 80 percent increase. But the reality is that any time you have change, the people who like the change jump on quick. But we're not going to know the full story until we get to August. Having said that, there are a lot of people who are ready for change and are excited. Volunteerism is up, which is a good indicator. So there's a good vibe out there. A lot of positive energy.

"But I think we're going to be up (in August). And in part because we're going to spend a lot more this year on marketing. You always market when there's something new. Last year we didn't market near as much. Last year we dropped our first big mail piece at the end of January. This year we'll be mailing something different and very sophisticated that will be somewhat personalized. We're putting a bunch of time and money into it. It'll be a combination ticket and Booster package, so everything you need will be in this one mailing."