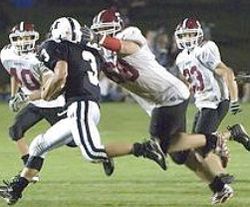 Number four in our series on the New Noles.

And one of those who know and believe is his coach at Salisbury School. Chris Adamson told us how Seminole signee Bjoern Werner landed at his New England prep school, why he signed with FSU, and a whole lot more about this very promising tackling machine from Germany.

So, Coach, how in the world did a kid from a European soccer culture become a hot college football prospect in America?

Adamson: "He'd been playing football in Germany, and was known as one of the top three or four young players in the country. USA Football (the group that put on the USA vs. the World game) had a program where they identified international players and helped them get to schools in America. Prep schools are able to take these guys because they don't have the restrictions on transfer students. Bjoern had three or four options, but felt Salisbury School was the best one for him."

How long did he play for you at Salisbury?

Adamson: "We had him for two years, his sophomore and senior years. After his sophomore year he was pretty homesick, so he went back to Germany for his junior year. But about halfway through that year he realized he'd probably made a mistake and wanted to come back and pursue the possibility of playing college football. So he came back for his senior year -- this past year -- and it's been great."

Adamson: "It did. They do a nice job of coaching over there and the German kids play football of some sort much of the year. And he saw some American football on TV and liked it. But it's funny that he started playing (American) football after getting hurt playing soccer. He thought it would be a safer option. So he started playing football and it was a natural fit for him. I knew he was good from seeing him on film, but I had no idea he'd be as good as he ended up being."

Was Bjoern pretty raw when he first got to Salisbury?

Adamson: "I'd say he was relatively raw, but he knew some of the fundamental stuff and was really good at it. Like he knew how to use his hands real well. He played with great bend. And he's always been great at pursuing the football. Some kids are just born with natural football instincts and abilities, and he's one of them. He can throw the ball 50 yards. He can kick it to the back of the end zone on kickoffs. He can punt it. He's just one of those kids who can do anything he wants on the football field."

Adamson: "He is. There was never any language barrier when it came to football. He picked up stuff right away."

Did he play mostly defensive end for you?

Adamson: "We played him at end primarily. But we actually moved him around so people couldn't run away from him. We played a 3-3 defense, and he played at nose some, as well as tackle. We also played him at linebacker for a couple of games. We had an injury so we put him at linebacker and he made 12 tackles. He can run really well and has a good nose for the football. He also played some tight end on offense and caught some touchdowns and made other big catches here and there. He's a good blocker and has good hands catching the football."

What do you think is his best position in college?

Adamson: "I think it's at end. I think he's going to surprise people how good his first step is. He can get around the edge and has a very good pass rush. He beat some of the top tackles in the country (at a major football camp) in one-on-one's. And he's versatile. He can play three-technique, but I think he'll be a good end."

We've heard speculation that Bjoern could gravitate to offensive line in college?

Adamson: "That was a concern of his, because he wants to play defense. And the FSU coaches assured him that he's a defensive guy for them."

How big do you think he can get?

Adamson: "He's got plenty of room to grow. He works out hard in the weight room, but he's mainly playing basketball right now. We only have an 11-week football season. So once he gets into spring ball (at FSU) and off-season conditioning, he's going to be something. He's only beginning to scratch the surface."

Who was his main contact from FSU in the recruiting process?

Adamson: "It was James Coley. We'd sent some film down there and they became aware of Will Tye first. Then they heard about Bjoern, who by that time was being recruited by Florida and Miami and a bunch of other places. So once they met Bjoern and looked at more film, they realized they wanted him as well."

Why do you think he chose FSU?

Adamson: "He went to a bunch of school on visits, both officially and unofficially. And he just felt really comfortable there (at FSU), and that it was the right fit in terms of location and the coaches. Also that he fit with what they're trying to do defensively going forward. It was a tough choice, because he had offers from some great schools. But he felt most comfortable at FSU. It was a gut feeling."

How about leadership qualities?

Adamson: "I think Bjoern can be a leader. He's one of our captains and his grades are pretty solid. He works hard in the classroom, and this is a place where you have to hit the books. We're not just giving our kids grades. And he's a really focused guy. He's not big on going out and partying. He's grounded by his fiancee and family."

He has an American fiancee?

Adamson: "No, she's in Germany. But they've talked about her coming over in the next couple of years and about getting married. They're looking at different scenarios for that."

So you don't think he'll get homesick again and have a change of heart?

Adamson: "No, he's grown up a tremendous amount in the last few years. He's a great kid. Very mature now and really different now than during his sophomore year."