« Beyond the Booster drive, some FSU fans are taking things into their own hands | Main | The Boosters' message to fans about an indoor practice facility: Be patient » 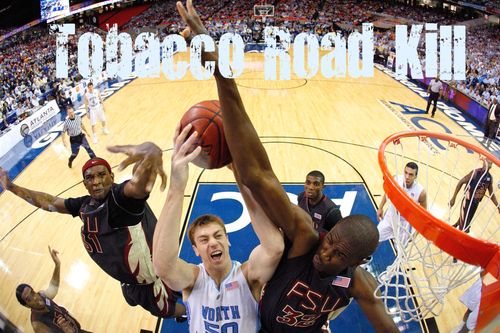 If there was ever a time to beat a Tar Heel team in Chapel Hill that was nowhere near its championship year last season, this was the time.

Florida State did not waste that opportunity, never trailing in the game, giving Leonard Hamilton his first win at North Carolina as the Seminole head coach by the score of 77-67.

Led by Chris Singleton’s 19 points, the Seminoles built a twenty three point lead at 59-36 with 15:36 to play after Devidas Dulkys (17 points) hit his fifth three pointer of the game from above the key.

The Tar Heels managed to slowly chip away at the lead getting the margin down to nine at 75-66. But only twenty eight seconds remained leaving Carolina with far too little time to overtake the Seminoles.

In a way it was a tale of two halves where both teams shot lights out in the first half. On the strength of 9 of 15 three pointers the ‘Noles  shot 53% from the floor while UNC connected on 52%.

It was not a statistic that especially pleased the defensive minded Hamilton, who said later “We had a hard time containing their dribble penetration.”

“That was uncharacteristic of us,” Hamilton added in commenting on the Tar Heels field goal percentage.

But you knew that both teams would not continue to shoot at that rate. With Florida State clearly having the better defense (2nd in the country in FG %), that played into the strength of the Seminoles in the second half, even if they were playing in a place where only one Seminole player (Ryan Reid) had ever played.

Holding UNC to zero field goals over the first 6:10 of the second half and just three baskets in nearly the first twelve minutes, FSU clamped down on the Tar Heels, holding them to just 32% in the second period.

UNC however was able to get to the free throw line seventeen times in the second half, converting fourteen of the attempts, allowing the Heels to scratch away at the lead while applying pressure on the ‘Noles.

The Seminoles were a little rattled by the Tar Heel press and trap and became hesitant on offense and a little careless with the ball as the game was winding down.

“For the most part we played with a tremendous amount of intensity,” Hamilton commented. “We didn’t play smart at the end, but we made our free throws at the end.”

Key down the stretch was Michael Snaer, who had a slam dunk off an assist by Singleton with just four seconds left on the shot clock at the 2:16 mark. A little more than a minute later Snaer drove past Will Graves thirty feet from the basket while the rest of the Tar Heel defense was extremely slow to react, giving the freshman from California an easy uncontested layup.

With the lead at 74-61 and just over a minute to play the outcome was pretty much sealed.

For the third game in a row the Seminoles were very efficient, with excellent decision-making reflected in the 19 assists on 28 made baskets.

“We are utilizing the talent we have,” Hamilton said about his improved offense. “It shows we are maturing and are learning from our mistakes.”

Florida State jumped out to a 23-12 lead after the Seminoles made six three pointers in the first 7:20. Each time North Carolina seemed poised to make a run at FSU, the ‘Noles were able to counter.

Dulkys’ three from the right corner with :25 left gave FSU a 48-33 halftime lead.

FSU came out after intermission with the same intensity, outscoring the Heels 11-3. Highlight of the run was an alley oop pass from Snaer to Singleton for the slam dunk, started initially with a strong rebound from Terrence Shannon.

Not to be overlooked was Reid’s effort, particularly his defense in holding Deon Thompson to just 7 points to go along with 10 rebounds (5 offensive) and a career high 6 assists.

Also in double figures for FSU was Derwin Kitchen with 13 points. Snaer finished with 11.

With the win FSU improves to 20-7, 8-5 on the season, and with Virginia Tech losing to Boston College moves into a three way tie for third along with Wake Forest.

Next up for the Seminoles is a Sunday home contest against Clemson, who lost later Wednesday night to Maryland. Tipoff is at 5:30 and will be televised on FSN.