Beyond the Booster drive, some FSU fans are taking things into their own hands 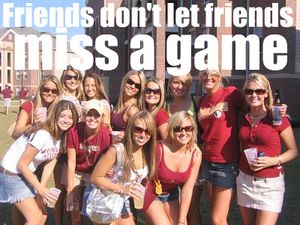 In part two of our recent Booster update with Jerry Kutz, the organization's V.P. of Marketing, we learned how some fans are doing more than just joining. Also, Jerry got into the real impact of what your Booster dollars do every year for Florida State sports.

Jerry, you mentioned volunteerism among Boosters is up. What kind of volunteers?

Kutz: "Guys like Jamie Warren in Panama City. That guy's probably signed up 500 new people. Right after the coaching change in December, he probably signed up 75 to 100 people right then. And in January I think he's signed up about 50 more. And then he's inspired other FSU fans like him around the state. We've got a guy in Tampa doing it, and another in Atlanta named Brian who started doing it. I think he's signed up 42. Brian and his wife created their own system -- a real simple step-by-step way to recruit people. And we've made it our model. So for anybody who emails me, we'll send them this little kit.

"Basically, Brian and his wife started by marking everybody in their address book who liked Florida State: around 52 people. So they emailed them all. I think they said eight of them replied that they're already Boosters. So they emailed the remaining 44 urging them to become Boosters. They were hoping to get five, but almost immediately they got eight. So they were encouraged and started calling people. They answered a lot of questions about why the Boosters need money when the school gets so much from things like bowl games. "

Kutz: "The Boosters need to raise $10 million every year just to balance the athletic budget and pay for all men's and women's sports. Of course, that's true at every university. Especially with the gender equity issue. There are only two sports that truly make money of the 19 at Florida State. And that's football and men's basketball."

Not even if the team goes to Regional and Super Regional tournaments?

Kutz: "The revenue in college baseball tournaments is so little, because the TV money is so little. I don't even know if it covers your travel costs. The TV contract with ESPN is minimal."

Do you see increased revenue from basketball in recent years?

Kutz: "Just like if our football team went 0-11, with the ACC TV deal we're going to get the same amount of money. That ACC basketball contract is big, unlike college baseball. Now, if we have a winning basketball team, then season ticket sales will go up, and they have. Remember, though, that student tickets are free. So the place may be packed but you're only bringing in 2,000 additional paying ticket holders. Remember, too, that with the other 16 sports, we don't even charge admission."