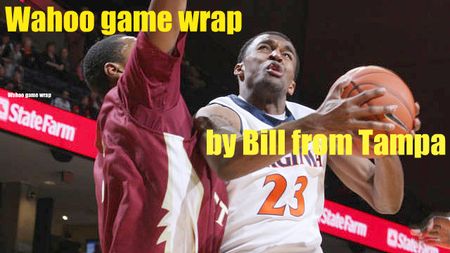 Meanwhile Hamilton’s defense throttled the Virginia Cavaliers 69-50 for the largest margin of victory in Charlottesville for the Seminoles since joining the ACC.

Maintaining a high level of intensity all game, FSU’s defense held Virginia to just 37%, including 28% from the three point line, backing up Sunday night’s performance with yet another dominating effort on the defensive side of the court.

Of note was the defensive job in holding the league’s fourth leading scorer, Sylven Landesberg (17.8 ppg), to just four points.

Calling it a team effort Hamilton praised the efforts of several of his players.

“We had a lot of heroes tonight,“ Hamilton said. “Ryan (Reid) and Chris (Singleton) did a very good defensive job on their two leading scorers. I thought Luke (Loucks) and Derwin (Kitchen) gave us very good leadership tonight.”

As good as the defense played, the offense was just as excellent. The Seminoles put four players in double figures with Singleton leading the way with 12 points, Loucks adding 11, and Reid and Gibson each scoring 10.

Add to that the 30 points contributed by the Seminole bench and it was an all around scoring by committee, just the way Hamilton likes it.

If the ‘Noles weren’t hitting one of their seven three pointers, the three post players were controlling the paint, combining for 12 of 19 shots.

Just as impressive were the fifteen assists on the twenty eight made baskets against only 10 turnovers, a season low for the Seminoles.

Referring to the 15 assists Hamilton said “I think that says a lot about our execution. We executed once we were in the half court. I like how our guys are communicating. We played like we are growing up.”

But being the defensive minded coach he is Hamilton of course migrated back to the defense.

“Our body language and communication was all about defense. We have the potential to be a very good defensive team.”

Virginia held the lead just twice and early in the first half. After that the ‘Noles controlled the game for the most part in getting a 33-24 half time lead on the strength of four three-point plays in five consecutive baskets.

Highlighting the first half was a steal by Loucks in the corner who then took it the distance for the layup around a Cav defender for a 26-20 lead.

In the second half FSU players took turns on offense. Five different Seminoles scored baskets, either in transition off of steals or via Reid, who had three very nice layups in abusing UVA’s Will Sherrill, who attempted to guard the senior forward in a futile effort.

After Singleton put in his ricochet shot off the backboard, the ‘Noles led 54-35 with 8:09 to play.

Essentially the game was over as the teams traded baskets for the rest of the game with the FSU walk-ons entering the game with one minute remaining. Joey Moreau took advantage of the floor time nailing a long three pointer from above the key.

Jeff Jones and Mike Scott led the Cavs with 13 and 10 points respectively. Scott scored six of his points in the first 2:13 of the game and was shut down by Reid after that.

With the first back-to-back conference wins this season, FSU improves to 19-7, giving themselves a cushion in the ACC at 7-5.

The Seminoles now own a series lead at 18-17, and the Cavs become the fourth ACC team FSU has a series lead over since joining the conference.

Also of note, while it wasn’t a stellar night stat-wise for Solomon Alabi, with his one blocked shot (the 90th of his career so far), Alabi moves into 9th place all time in the FSU record books, going past Elvis Rolle.

The Seminoles will take tomorrow off before going back to work Friday to prepare for the North Carolina Tar Heels in Chapel Hill. Tipoff is next Wednesday at 7 PM.