« Can Greg Reid convince Telvin Smith to stick close to home? | Main | Late entry on FSU's recruiting list is no longer a fan of U-know-who » 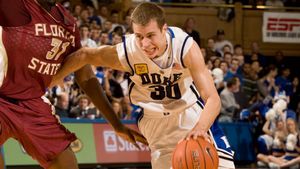 Well, at least Florida State led in the game. Two to nothing if that is any consolation. But after Jon Scheyer connected on a three point shot from above the key it was pretty much the Duke Blue Devils’ game in beating the Seminoles 70-56.

With the assistance of 22 turnovers by FSU, 14 in the first half alone, Duke scored 22 points off the miscues and therein was the difference in the game.

“We put ourselves in a deep hole in the first half,” Leonard Hamilton said following the game. “We just didn’t execute the game plan. It’s amazing to me that we were in a position to win the game down by five and going to the free throw line.”

Hamilton was referring to a point in the game with 8:56 left the ‘Noles had pulled to 51-46 after being down by sixteen points just five minutes earlier.

Outscoring the Blue Devils in an 11-1 run behind 9 points by Michael Snaer, Chris Singleton went to the free throw line but converted only one of two to pull FSU within four.

To make matters worse Derwin Kitchen who had grabbed Singleton’s miss was fouled, only to miss both freebies.

The Seminoles collected the rebound and had three shots at the basket but was unable to convert all three offensive put backs. Instead, Duke went on a 15-3 run to lead 66-50 with time very much on the side of Duke.

After shooting 52% in the first half Hamilton assessed his team’s second half shooting woes on anxiousness.

“This just shows a team that was anxious and aggressive but not sticking to the game plan,” Hamilton commented. “We had the opportunity to make dunks but pulled up and took short shots. We attacked too fast. I expected us to be more fundamentally sound tonight.”

It wasn’t all bad for the Seminoles, however. Of particular note were the 18 assists on 23 made baskets as well as controlling the boards 40-30. Kitchen contributed heavily in both areas with a career high 10 assists to go along with 7 rebounds.

Singleton and Solomon Alabi led the ‘Noles with 14 points each and with 9 and 10 boards respectively. Shaky in the first half in committing five turnovers, Snaer settled down and scored all 13 of his points in the second half.

Duke’s productive trio of guards combined for 53 of the Blue Devils’ points with Scheyer’s 22, Kyle Singler’s 20, and 11 by Nolan Smith.

Hamilton added, “We got beat by a team that deserved to win. They executed well and played a game that gave them the best chance to win.”

Next up for FSU is a trip to Boston College to take on the Eagles Saturday in a 3 PM contest. The Seminoles have yet to win at BC in three attempts, losing each game on the last possession of the game.