« Late entry on FSU's recruiting list is no longer a fan of U-know-who | Main | A first-ever FSU win on B.C.'s home court »

Too late to pull Terrence Mitchell back into the fold before signing day? 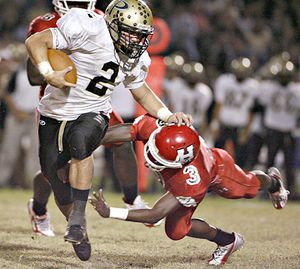 Both the O-Sentinel and St. Pete Times, as well as Rivals, are now reporting that 4-Star DB Nole commit  Terrence Mitchell has made the switch to USF. The Times story gives the most insight, including reasons that motivated the decision by T-Rex (#3 in the photo).

1. He fell in love with the new USF coaching staff.

2. A chance to play with his cousin, RB Lindsey Lamar.

3. Opportunity to see the field early (maybe as a freshman).

4. A short drive for his family to see him play.

5. USF has always been one of Mitchell's favorites.

Hey, you win some and you lose some, especially in recruiting. And if FSU can't turn T-Rex back to the Garnet & Gold, he won't be the last great prospect lured away by Skip Holtz. The Bulls have a serious, big-time coach now. Jim Leavitt put the Temple Terrace school on the map in record time, but Holtz is a major upgrade in many ways -- including the all-important need to put a likable, articulate face on the program. With Holtz on-board and this year's loss to USF, the Noles will find it tougher to land top talent in the bay area and I-4 corridor. And we're talking now and in the foreseeable future. Once the on-deck guy for the Notre Dame job, Holtz knows that unless Brian Kelly stumbles, he couldn't find a better opportunity outside the true elite programs.