So, Bobby, what was that again about not wanting to retire? 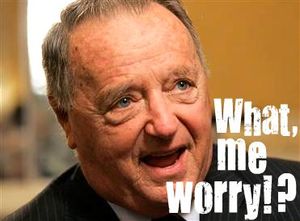 Forget all that sad stuff about recent retirees being ducks out of water, lost and without a purpose in life. At least we know one who couldn't be happier, now that he's sleeping late and not having his stomach in knots. "I have really enjoyed it," Bobby Bowden, that new man of leisure, told the Mobile Press-Register.

Uhhh, but what about the excitement of another season ahead, something Bowden always looked forward to? "I don't think I'm going to miss it," said the college football legend, as his inner voice chuckled, "Eat your heart out, Joe Paterno." In other Nole News:

Stewart bummed. Recently departed FSU DT Kendrick Stewart leaves with a bad taste in his mouth over all the hard-earned wins forfeited, thanks to the NCAA. Perfectly understandable. But here's something we do have trouble with. Stewart, now bulking up for FSU's Pro Day, says he "wants to add about 20 pounds of lean muscle, which would put him up to 290 pounds." To that we can only scratch our heads and say...NOW!?

Chaaa-Ching! FSU fans wanted coaching changes, and we got 'em. To the tune of $2,295,000. That's the total payroll of all the new, and a few current, assistant coaches that was announced Monday (excluding Jimbo and Trickett). Now it's time to ante up, put your money where your chop is, and write that 2010 Booster check.