« Unconfirmed report: Chuck Amato has cancer | Main | Over five hundred games on the Seminole sidelines and he's coming back for more »

The hazards of being Jimbo Fisher 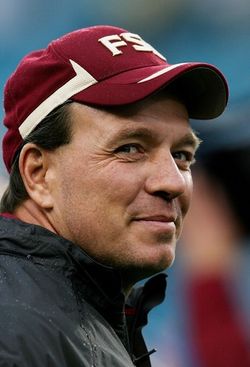 We're totally psyched, fired up and practically levitating with excitement over the beginning of the Jimbo Fisher era. But we're also concerned.

Can the new Chief on the reservation take the 24/7 pressure cooker, with every decision second-guessed by the media and thousands of fans? Can he continue to drive himself and his staff for, oh, say 35 more years?

That's how long the 45-year old Fisher has to go if he wants to make it to Bobby Bowden's retirement age.

Don't bet on it. Even if Jimbo wins big, brings home championships and gets his own statue at Doak, odds are heavily against anybody pulling another Bowden or Paterno.

Fisher is 45 and apparently healthy. But let's hope he can maintain the pace without slipping on the big banana peel of stress.

Chuck Amato obviously couldn't. As we reported yesterday -- and was verified later by the mainstream sports media -- the 64-year old coach has throat cancer, though treatment is going well and he expects a full recovery.

Meanwhile, back at the Urban Meyer soap opera, no recent reports of chest pains, brain cysts, or PTSD. But he's still on indefinite leave of absence. No wait, he may be back this year. That is if he's not rolling around the floor in agony while his wife calls 911.

UConn Coach Jim Calhoun is taking an in-season leave of absence with no guarantee of return. The 67-year old's ailment (unknown) is the latest on his medical chart that includes three bouts with cancer (prostate and skin).

And just this week two well-known coaches 'fessed up about the heavy toll coaching can take on health and family.

Former Alabama and Georgia Tech coach Bill Curry told the Atlanta Journal-Constitution: "I destroyed my health in 21 years of coaching and got to the level of fatigue where I couldn't operate as a good decision-maker, with migranes and exhaustion overtaking me...

I have children who have gotten sick of me apologizing over the last 15 years for not being there."

Georgia coaching legend Vince Dooley admitted something similar:  "I had the same problem with not spending as much time with my children. I largely neglected them...(as for health) I had a heart problem. We were playing Vandy and they had jumped out on us by three touchdowns...and suddenly I'm having chest pains...I was thinking that this would be a heck of a way for my career to come to an end. Fortunately, we caught Vandy and my pain went away...for a couple of days. I ended up having angioplasty."

Dooley jumped off the coaching carousel at a relatively young 56. Curry quit in 1996, but obviously couldn't get the coaching bug out of his system. Last year he signed on at Georgia State in Atlanta, a fledgling program that starts play this fall.

So, Jimbo, while we're all hoping for great things, we're also wishing you healthy blood pressure readings and the time to be a Dad before your sons are too old to be hugged.