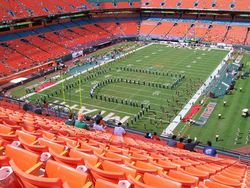 For the last year or so, college football authorities have toyed and teased with crowning FSU and/or Miami as being back to their rightful place among the gridiron elite. Well, apparently some of the cognoscenti have convinced themselves that Miami has achieved "back," while ignoring FSU like Michael Vick at the Westminister Kennel Club Show.

As we detailed last Friday, all the early bird Top 25 predictions for 2010 were eager to rank the Canes as high as #5. Only one of those polls included FSU (ESPN's Mark Schlabach at #21).

And Monday another early bird Top 25, this one by CBS Sports Dennis Dodd, trumpets UM's supposed return to greatness with a #12 ranking and the belief that "The 'Canes will take another step into growing into a national championship challenger." I suppose we should be thankful Dodd at least included the Noles in his "Ten to Watch" list.

Looks like Dennis and his colleagues may be overlooking just a few things, such as:

• How the Canes totally gakked it in the Champs Bowl (and against the same team that FSU whipped in the same bowl last year).

• Wisconsin demonstrating how to pressure the supposedly unflappable Jacory Harris and throw UM out of sync.

• The supposedly unnecessary surgery Harris will now have on his throwing hand, sidelining him for much or all of spring practice.

• The redshirt freshman (A.J. Highsmith) that will be UM's only healthy QB til Harris returns.

• An even nastier injury that apparently knocks leading rusher Graig Cooper out for the entire 2010 season.

• Not to mention the recruiting class that writers for both The Herald and Sun Sentinel say could be a disappointment.

• Not to mention #2: UM's recruiting coordinator and D-Line coach, Clint Hurtt, is all but out the door.

Now does that sound like a team that's back, swagger and all?