Urban Meyer not built for the long haul 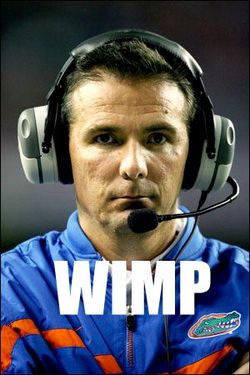 Some guys -- hell, most guys -- aren't cut out for those super high stress jobs, like Fortune 500 CEO's, generals and football coaches. It takes a pretty special mensch to work a zillion hours a year and inspire his organization to push for ever higher levels of success.

Apparently Urban Meyer is not one of that special breed.

Sure, that's harsh. But if he's been having chest pains for three years, and throughout the current season, he'd be crazy to push his luck by jumping back into the 24/7 pressure cooker of a D-1 head coach.

So at 45 years old, he's going to take a breather, smell the roses, and get his health back.

Meanwhile, Bobby Bowden must be secretly wondering what's up with these young whippersnappers who can't cut it? After all, Bowden's 35 years older than Meyer and just getting around to hanging up the whistle.

Did he ever have chest pains!? Naw. Just bunions and occasional heartburn from the spicy cooking of some recruit's Mom.

Stress!? Just chew through another unlit cigar and read a Bible verse or two. Maybe break off another piece of that Hershey bar in the top left drawer.

Sabbaticals!? Shoot, those are for college profs doing research in Patagonia, not college coaches on a non-stop mission.

Of coure, Bobby isn't the only coach scratching his head over Urban's untimely time out. Up in Happy Valley, Joe Paterno just turned 83 with no thought of retiring, much less turning the reins over to an assistant so he can catch his breath.

Remember the irony of Bear Bryant? It wasn't the coaching grind that killed him. It was the retirement.

And then there's 44-year old Jimbo Fisher. Very soon he'll join that high risk/high reward club of head coaches. And like Bowden, Paterno, Brown, et al, this "youngster" who's been head coach-in-waiting appears to be equipped for the long haul.

He seems to know the coaching gig is a marathon. And those who drop out along the way may never catch up.