Warrick Dunn moves into a new position with his old NFL team: Owner 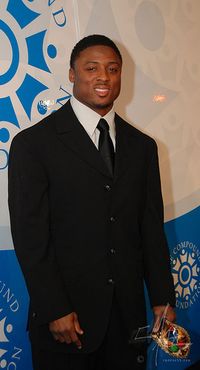 Warrick Dunn's playing career may have wrapped up in 2008, but he's staying in the NFL as part owner of the Atlanta Falcons. The deal already has been rubber stamped by the other NFL owners and Dunn expects the deal to become official on March 1 of 2010.

It's a safe bet that quick approval by league owners is due to Dunn's spotless image both on and off the field. Not to mention his charitable works. Is there an NFL player, current or former, who's done more for his fellow man?

And if you have a Seminole fan left on your Christmas list, Dunn's new book has some great memories of his days at FSU. 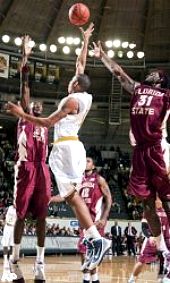 Florida State was seemingly in control of the game leading Georgia tech 52-45 with 3:58 left in the game. But the ‘Noles would only score one more basket while Tech chipped away tying the game at 54 with half a minute left.

On a play designed for Derwin Kitchen to attack the basket, Tech switched up its defense and Kitchen found himself being guarded by the 6-10 Derrick Favors. Instead of a game winning basket a turnover resulted by Kitchen and the Yellow Jackets could not get off a last second attempt thus sending the game into overtime tied at 54 all.

In the extra period Tech took an immediate lead when Zack Peacock hit a three pointer from the left corner even with Devidas Dulkys’ hand in his face.

But as they had done all game long, Florida State answered with back-to-back baskets by player of the game Ryan Reid with assists from Kitchen.

Peacock tied it up again at 59 with 1:37 left. It was the last points the Yellow Jackets would score.

Reid found a wide open Chris Singleton who flew down the lane banking in the shot to give FSU a 61-59 lead with one second left on the shot clock.

Kitchen was fouled after grabbing an air ball by D’Andre Bell. Missing the second attempt, Brian Oliver failed to block out Kitchen who was fouled once again after rebounding his own miss. FSU led 63-59 after Kitchen converted one of two from the line again. But only 27 ticks remained on the clock.

In what was another play indicative of Reid’s performance, on the subsequent possession the senior forward stepped into the lane to take a charge by Mfon Udofia.

Luke Loucks made one of two after being fouled on the inbound pass giving FSU a five point lead.

To finish off the 7-0 run and the game Kitchen raced up the floor lobbing the ball to Jordon DeMercy for the slam on a three on one break giving the ‘Noles a 66-59 win in the opener of conference play.

Positive: Hudson should be a solid LB Coach
Negative: His needless door-closing denial

If the media rumors are true -- and some sources are still skeptical -- FSU is replacing "The Chest" with "The Dome" as linebacker coach. East Carolina Defensive Coordinator Greg Hudson would be taking a step down as far as job title, but apparently moving into a higher tax bracket was an offer he couldn't refuse.

But are you bothered by this statement made to Pirate Illustrated on Saturday night, just an hour or two before he supposedly accepted the job?

Maybe he was still making up his mind. Maybe trying to get the press off his back. But doing the exact opposite of what he said "I will never" do is ill-advised for a guy who needs potential recruits to believe in what he promises.

More bad news, good news. Hudson's ECU defense underachieved this season. His scoring D (#39 nationally) and rush D (#35) were at least middle of the pack. His pass defense? Ugh. It was near the bottom at #110 among Div.-I teams. But Hudson's D was among the best (#5) in the red zone. That suggests, at least to us, that his forte is coaching and recruiting guys who play the front 7.

On the plus side: The colorful 41-year old Notre Dame grad is known for his hard-nosed scrimmages with the emphasis on old school tackling, not just wrapping up. Our contact at ECU told us Hudson is very intense, but the players all worship him. And he's fresh blood that should be a welcome change from the previous LB coach (including a less wacky wardrobe).

Oh, and furthering the tough dude image, Hudson rides a Harley to work, even in lousy weather.

What kind of coach will Dameyune Craig be? Here's a sneak preview from his short time at South Alabama

High fives for another smart hire by Jimbo Fisher. The video above gives you a flavor of Craig's personality as well as his passion for the game, and includes some clips from his days QB-ing at Auburn. His coaching resume is also impressive for such a young guy: A year with Nick Saban on the Dolphins staff; QB Coach at Tuskeegee; a grad assistant working for Jimbo at LSU. Add to that his latest job: wide receivers coach at South Alabama's start-up program.

Before he went the coaching route, Craig bounced around the NFL, including time in the European league, where's he still revered by fans of the Scottish Claymores.

Another night, another Seminole squeaker

It’s been a recurring theme. Despite nearly blowing a double digit lead, missing four free throws in the final 2:03, and committing 19 turnovers, four in the first ninety seconds of the game, somehow the Florida State Seminoles found a way to win the game again, this time 76-72 over the Auburn Tigers.

FSU held a 14 point lead, 49-35, with 13:34 to play and was seemingly well in control of the game. But missed chances by the ‘Noles allowed Auburn to inch back. Chris Singleton’s slam dunk would have put the Seminoles back up by 11 but instead clanged off the back of the rim.

A layup at the other end made it 49-42 as the Tigers continued to creep closer.

Auburn tied the score three times at 59, 61, and 63 but was repelled each time by the Seminoles. Or more accurately by Solomon Alabi who scored 11 of FSU’s 13 points over a five minute span. Alabi’s awkward looking push shot plus the foul put the ‘Noles up 72-67 with thirty six seconds remaining.

Still FSU could not put away the Tigers. Ty Waller’s heave from the left wing banked in closing the score to 75-72 but with a little more than four seconds on the clock. Only after Derwin Kitchen made the second of two free throws a second later was the game’s outcome sealed.

Alabi matched his career high set just two days ago scoring 20 of his 22 points in the second half to go along with 9 rebounds and three blocked shots.

Leonard Hamilton credited Alabi’s patience in the second half for the scoring outburst. “In the first half, Auburn played him very physically. He didn’t handle it very well”, Hamilton said. “Obviously the second half was much better.”

Meanwhile, back at FSU's practice fields... 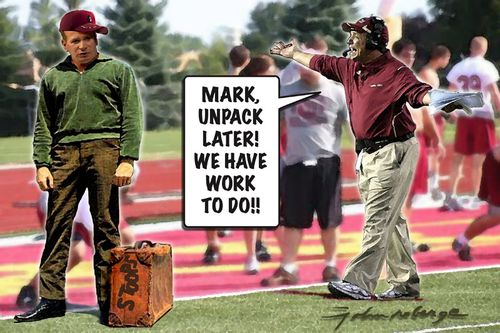 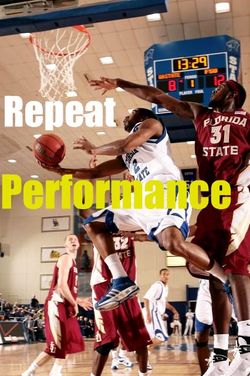 They might as well have just run a replay of last year’s game against Georgia State, when the Seminoles lost a 19 point lead only to see Derwin Kitchen convert two free throws in the waning seconds to put the game out of reach and secure a 62-57 win.

With FSU leading by 17 in the second half, the ‘Noles struggled to bring home the win. Once again Kitchen sank two crucial free throws with twenty three seconds remaining to give the ‘Noles a six point lead.

A defensive stand at the other end in the form of another blocked shot by Solomon Alabi, his sixth of the night, made sure there would be a similar outcome.

Luke Loucks made one of two from the stripe that gave FSU almost virtually the same score as last year’s game against the Panthers, winning 62-55.

Unlike recent games, FSU started off fairly strong getting out to a 25-11 lead at the 8:30 mark, when Loucks’ no-look pass found Xavier Gibson for the wide open slam dunk.

The Seminoles even did a good job of protecting the ball in committing just one turnover in the first seven minutes.

So exactly when was the tipping point for Florida State's defense? 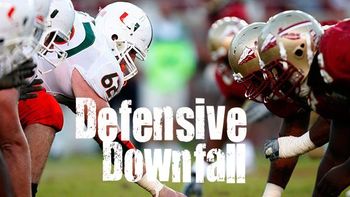 With a new Defensive Coordinator on board and blue chip talent on the way, the future looks bright for FSU's once proud D.

Like the cavalry riding in to save the day in a classic western, FSU fans could always depend on the defense when the chips were down and victory hung in the balance.

No matter how erratic the offense played, we knew the defense would ride to the rescue. They had swagger. They had guts. Most of all, they had our trust and confidence. Not just during the Dynasty Days, but even in the difficult years earlier in the decade.

So just when did those hard-nosed heroes first let us down? When did they publicly wet the bed, signaling a downslide that would end in the all-time ugly meltdown of 2009?

FSU was ranked #10, enjoying an 8 - 2 season, and favored to beat the gators yet again at Doak (the last time the reptiles had left Leon County with a win was 1986).

Florida was playing for a lame duck coach. The...um, colorful Ron Zook had been fired a month earlier for his inability to fill Steve Spurrier's shoes, much less his visor. Then there was the Zookster's embarrassing Chuck Norris fantasy, when he led a group of players to a frat house to punch out the brothers.

Nole fans were looking forward to toasting and boasting on that night of November 20, 2004. Not only was FSU favored, history was being made with the dedication of Bobby Bowden Field and unveiling of the gaudy stained glass image of Bowden.

But the Crocs refused to play along with the underdog role. Early in the fourth quarter they led FSU 13 - 3.

Then Chris Rix replaced struggling starter Wyatt Sexton and threw a TD to Chauncey Stovall, cutting the lead to 13 - 10.

Continue reading "So exactly when was the tipping point for Florida State's defense?" » 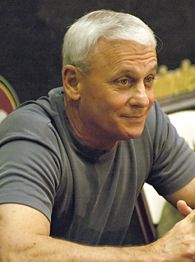 We can't vouch for their track record, but Football Coach Scoop is reporting that Central Michigan Coach Butch Jones will be Marshall's new head man.

But wait, there's more: This West Virginia Gazette story reveals that Marshall is so smitten by Jones, they sent a private jet charter to pick him up and fly him in for the interview. We doubt Trickett got such jet set treatment.

Hiring Jones makes sense because (1) He's already a successful head coach, guiding Central to the MAC title. (2) He has West Virginia dirt under his fingernails, having been an assistant for two years with Rich Rodriguez at WVU.

Speaking of the Mountaineers, West Virginia QB Jarrett Brown was a huge Seminole fan -- until FSU never called during recruiting season. So Brown will definitely be playing with a chip on his shoulder, as if the 'eers needed any extra incentive in the Gator Bowl game. 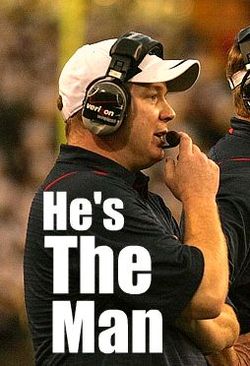 “I know it’s a tough decision, but I think it’ll be good for Mark to be on his own and to help develop Florida State. I think it’s a good move for him personally and professionally and to grow and be on his own. He’s done some awfully special things here, and certainly being a defensive head coach I sometimes get credit for that, and really Mark has developed his skills as a coach over the last three or four years. He’s really grown in a lot of ways and I think he’ll continually grow in this position.”