« Warrick Dunn moves into a new position with his old NFL team: Owner | Main | Laugher over Skyhawks has Hamilton smiling »

At least Bowden drove his own golf cart 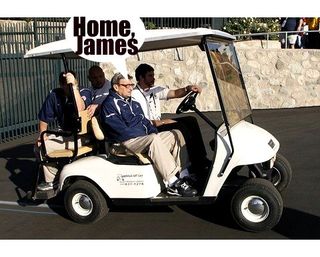 Pardon us while we get a little nostalgic about yesterday's scene at the FSU practice fields.

Whew, as much as we believe Bowden's retirement is a positive move for the program, the finality of seeing the old coach steer his golf cart (without a chauffeur, thank you) through the practice field gates for the final time...well, it's just coming to end even faster than we imagined.

A grand finale at next year's opening game would've been a far better way for us all to say our goodbyes. That possibility was hinted at in this interview Bowden gave just a few days ago. Very possibly his last as head coach.

But as you can tell from the interview and his comments Tuesday after practice, he really doesn't want any fuss. He's downplaying all the drama and sentiments of these final days at the helm -- almost to the point of being in denial.

Which makes it even harder for thousands of FSU fans who have known Bowden and only Bowden as the Seminoles Chief. For them this is a form of separation anxiety, for which they deserve a little understanding.

For the rest of us -- well, better days are ahead for FSU football. But probably never again as good as Bowden's best years. Never again at Florida State, and never again in college football.

Meanwhile, we hope Paterno has a flat tire in that damn golf cart that he can't even drive on his own.