By this time next season... 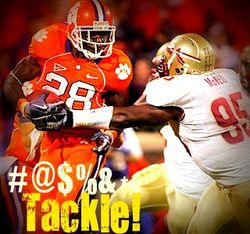 • FSU will have a defense that can wrap up and tackle.

• The D-Line won't be pushed around because of lack of size.

• The Noles offense will have a vertical passing game to complement the repertoire of screens and other short routes.

• FSU won't have a worse ACC record -- and overall record -- than Duke.

• FSU won't be last in the ACC in most defensive categories.

• Special teams will play with more discipline and not lead the country in blocks in the back, personal fouls and other dumb penalties.

• E.J. Manuel will be ready to take the team on his shoulders when C. Ponder bangs up his (though Manuel might have to do it this season if C.P. is injured worse than first thought).

• Tavares Pressley will catch passes at critical moments, earn Jimbo's trust and form a strong RB tandem with Jermaine Thomas and others in an exceptionally deep stable of backs.

• FSU will have a new Athletic Director. His name is Randy Spetman and he'll move up from Assistant A.D. when T.K. Wetherell retires.

• C.J. Spiller won't be around to run, catch, return kicks and pretty much be Clemson's offense.

• Uh, did we mention that FSU's defense will learn to wrap up and tackle?