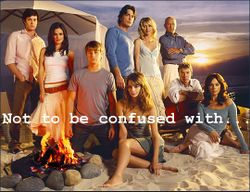 As long as Bobby Bowden has been the Head Coach at FSU the ‘Noles have been known to play one of the toughest schedules in the nation; but last season saw Florida State take on one of the worst group of Out-of-Conference opponents in recent memory. Fortunately that one-year blip is behind us and FSU has lined up an OOC schedule for 2009 that’s closer to our standards (in advance of the absolutely absurd OOC schedule the ‘Noles face next year). So let’s take a look ahead at the non-ACC teams FSU will play in 2009 and my take on the ‘Noles chances of coming away from each contest with a victory.

Looking over the four opponents one glaring similarity stands out – Each team returns an experienced starter at quarterback who could prove to be a pain in the ass for the ‘Noles. For a team like FSU with question-marks on the defensive line and in the secondary that could pose a bit of a problem, especially since three of the non-conference games will take place before October, when the youngsters on D are still getting their feet wet. How well FSU can deal with the four talented QBs will go a long way to determining the ‘Noles OOC record and post-season fate.

So without further ado let’s take a look at the ‘Noles non-conference slate for 2009, along with some of the opposition’s stats from the 2008 campaign…

The lone soft spot in the OOC schedule is the Jacksonville State Gamecocks from the second-tier FCS.  You can hardly blame FSU for taking a breather here considering the rest of their schedule, but after the scare against Troy a couple years ago no FSU fan should take this game for granted. Not only will the ‘Noles be coming off of a tough game against Miami and a short week of practice, but JSU has a quarterback who’s no stranger to big-time competition – former 5-star recruit and LSU Tiger Ryan Perrilloux.

The Downside – Dual-threat QBs like Perrilloux have routinely been a problem for Mickey Andrews’ defenses recently (see: Vick, Michael or Taylor, Tyrod). Not only did Perrilloux lead the Gamecocks in passing last year, he was also their second-leading rusher, scoring seven TDs on the ground.

The Upside – FSU should enjoy a huge advantage in the trenches. Jacksonville State’s rush defense wasn’t great last year even against FCS competition, so FSU should be able to establish the running game early in this contest and wear down the Gamecocks’ defense, opening up the passing game for Christian Ponder and Co.

Telling Statistic – Perrilloux accounted for 60% of the Gamecocks’ offense in 2008.  Stop him and the game is pretty much over.

FSU’s Chances of Victory – 98%. Really, unless the team bus careens off the Pensacola Street flyover this should be a relatively easy victory for FSU.

A week later FSU travels to the overly-friendly confines of LaVell Edwards Stadium to face the Stormin’ Mormons of BYU. A battle between teams with contrasting styles, this game should turn out to be a contest of which team does a better job establishing its offensive identity – can BYU throw on FSU’s young secondary, or will FSU run rough-shod over BYU’s depleted defensive line?

The Downside – I mentioned before that mobile QBs have been a match-up problem for FSU’s defenses lately.  Another persistent issue has been covering talented tight ends, and BYU boasts one of the nation’s best in senior Dennis Pitta.  As a guy who had Pitta on his (undefeated) CFB fantasy team last season trust me when I tell you the guy is a beast (83 receptions, 1083 yards, and 6 TDs in ’08; just in case you didn’t believe me).  Dekoda Watson and the safeties need to stick to Pitta like Ralph Friedgen on a bucket of fried chicken, especially in the red zone.

The Upside – Rushing defense wasn’t exactly BYU’s strong suit last year and since then they’ve lost some of their best defensive linemen.  If FSU’s offensive line is all they’re cracked up to be the ‘Noles should be able to run on the Cougars, eating up the clock and limiting chances for BYU’s dangerous offense.

Telling Statistic – BYU went 0-3 vs. teams ranked in the top 25 in total defense in ’08, 10-0 vs. everyone else (FSU was ranked #15). The difference? The front sevens of the better defenses overwhelmed BYU’s offensive line and limited Hall’s effectiveness – he was under 55% completions with 0 TDs and 7 INTs in losses to TCU and Utah. In other words, FSU’s really needs a strong performance from its young D-Line in this game.

FSU’s Chances of Victory – 65%. Despite the altitude and travel I like this match-up for FSU. BYU’s weaknesses play to FSU’s strengths and we should be able to wear them down with the ground game.  Putting heat on Hall will be a big key, though. 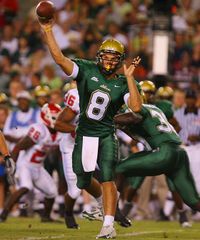 This is the game that really scares me. FSU has a lot on the line here and a home loss to USF would hurt for several reasons; recruiting, the ACC/Big East rivalry, in-state bragging rights, etc. This is also the game where I think the long trip to Utah could hurt FSU.

The Downside – The Bulls are a well-coached and talented team that’s right on the verge of challenging the ‘Big Three’ in Florida and establishing themselves as a football power in their own right. A win in Tallahassee would go a long way to accomplishing that goal, and you can be sure the Bulls will be highly motivated coming into this game.  In addition, FSU’s losses last year all came to teams with stout defensive fronts and USF was 10th in the nation in rushing defense in 2008, not to mention they’ll have senior DE George Selvie flying off the edge. Bottom line: this is a very dangerous game for the ‘Noles.

The Upside – Really there isn’t a lot of upside to this match-up for FSU. If they win it will be expected, but if they lose you can be sure you’ll hear plenty of stories about the “shifting balance of power” in the state, whether true or not. South Florida is also a bad match-up for the ‘Noles offense. With a stout run D you can bet they’ll do everything they can to limit FSU’s ground attack and force Christian Ponder – who had his worst games last year in Tallahassee – to beat them through the air. Yikes.

Telling statistic –  - 0.62 turnover margin (#98th in the FBS). When you look at the Bulls stats from last year it’s hard to figure out how they lost five games… until you realize just how many issues the team – and Grothe in particular – had with turnovers.  Forcing USF to give up the ball will be of paramount importance if the Seminoles hope to defend their home turf.

FSU’s Chances of Victory – 51%, and if this game was in Tampa I would absolutely make USF the favorite. This game is a huge opportunity for their program to gain respect in the state and around the nation so they’ll be super-motivated; and they have more than enough talent and coaching to pull out a victory. 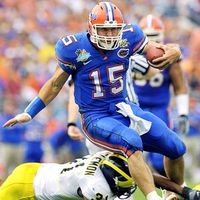 A maddening sequence of events has led to UF’s ascension as the premier program in the state and one of the elite programs in the nation. As if they haven’t caught enough breaks lately, almost every member of their National Champi… you know what, I can’t bring myself to write it out; let’s just say they get back almost their whole team from last year. Looking through their statistics from ’08 it’s hard to find an identifiable weakness. Even the pedestrian rank in Passing Offense is a bit misleading considering their gaudy 9.1 ypa average. Realistically FSU can only hope to show that they’re closing the sizable gap that exists between the two programs at the moment.

The Downside – 13.5 to 45.0. That’s the average score of the last two contests between the two arch-rivals, and even that doesn’t accurately reflect FSU’s offensive incompetence in the two games. With Brandon Spikes and their entire front seven back Florida should have an outstanding rush defense meaning Christian Ponder will be asked to do what no FSU QB has done against UF since 2004 – consistently move the offense. Oh, and he’ll have to do it against one of the best secondaries in the nation.  Good times!

The Upside – The opportunity to possibly derail the Gators’ National Title hopes, crush Tebow’s Heisman chances, wipe the shit-eating smirk off Urban Meyer’s face, and cause UF’s gelled-up popped-collar fanboys to cry in their jaeger-bombs?  Yes please!  Also, this is the last time FSU fans will be forced to listen to Gary Danielson verbally fellate Timmy for three straight hours. Do you guys think Danielson has ever pleasured himself to pictures of Tebow’s off-season workouts? Yeah, so do I.

Pain in the Ass QB – Tim Tebow (2746 passing yards / 9.2 ypa / 30-4 TD-INT / 673 rushing yards / 3.8 ypc / 12 TDs). Really “pain in the ass” doesn’t even begin to do him justice.  Tebow’s had his way with FSU the last two years and used the game as a springboard to the 2007 Heisman Trophy. Add in the excruciating agony of listening to CBS’ announcers circle-jerk all over the guy and no matter what happens in the game FSU fans can be happy that this is the last time we have to face the all-time leader in TDs Scored by a Virgin ever again.

Telling Statistic - +1.57 Turnover Margin (#2 in the FBS).  Contrast this to South Florida, which actually put up similar statistics to Florida last year, and you can see what really makes UF such a tough team – they don’t make mistakes and they punish other teams who do.  If FSU is to pull off the upset they’ll have to force a few turnovers in the game, which isn’t easy against Florida.

FSU’s Chances of Victory – 15%. It can be done. I don’t believe the hype that this UF team is a Best Team of All-Time contender – the offensive line and running game aren’t all that great and complacency could be an issue – but in order to win FSU will have to find a way to control Florida’s ground game (including Tebow on short yardage) and force some turnovers. A few lucky bounces and fortuitous calls wouldn’t hurt, either, but just based on where the two programs are right now the odds are heavily stacked in the Gator’s favor.