« Monday night games a problem for Nole fans? Not judging by the last one | Main | The O.C.C. » 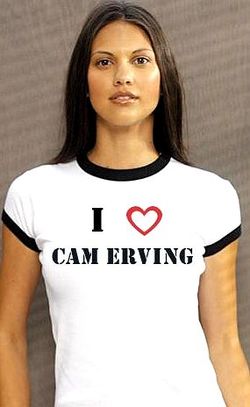 They love Cameron Erving up in Moultrie. But outside of Colquitt County, Georgia, it's "Cameron who!?" That is until a few days ago when the stealth D-Tackle committed to FSU.

So to find out more about Cameron, we checked in with Wayne Grandy, Sports Editor of The Moultrie Observer. As you'd expect in South Georgia, his primary beat is Colquitt County Packer football.

Wayne, how did Cameron stay off the recruiting radar so long?
"He wasn't even a starter as a sophomore. He was a tight end and hardly played. Then he grew fast and really hit the weight room. He improved his strength and added another 30 lbs. or so. Then he was moved to tackle in his Junior year and people started to notice.

"Coach (Rush) Propst is high on him and says he has a big upside. He said Cameron was recruited by FSU as a D-lineman but wouldn't be surprised if they tried him on the offensive line."

Does he still have room to grow?
"Even though they're listing him at 285 lbs., he's tall and even looks lanky, not fat at all. So he could probably add even more weight."

What's he like off the field?
"No issues, he's no thug. Has good parents and a solid family. His dad even picks him up everyday after practice. He's a kid everybody's pulling for."

Will Cameron play offense as well as defense this year?
"No, he'll only play defense. All the Colquitt players play on just one side or the other."

Has he had any injuries so far?
"No, he's been injury free. He hasn't missed a game, and he was on the field a lot last year."

Word is that Cameron is serious about school and football.
"He's bright and should handle college work. And he's a quiet kid, the kind that says Yes Sir, and No Sir. He's working hard to do his best and says he knows he's gotta go out and play well this year."

Sounds like the kind of player FSU fans will also grow to love.