Monday night games a problem for Nole fans? Not judging by the last one 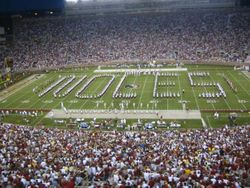 Lots of speculation lately about why FSU hasn't sold out this year's UM game. Andrew Carter and Scalp 'Em both have their list of reasons why empty seats may mar the night.

Playing on a Monday shouldn't be one of them. Not if Doak Campbell's only other Labor Day game is any indicator.

And did we mention it was an FSU team with lesser expectations than the 2009 Noles? Not the least of which was the great unknown: breaking in a new QB (redshirt freshman Drew Weatherford)?

Here's a reasonable number to shoot for this year. Besides winning numbers on the scoreboard, a crowd of 80,000 would be a successful night. Not record breaking, but proof that Nole fans -- like their counterparts in Gainesville -- will find a way to cheer on their team, even in a lousy economy.