« Announcing FSU's Best from a down decade | Main | From the people who brought you game forfeits, the great cookie atrocity » 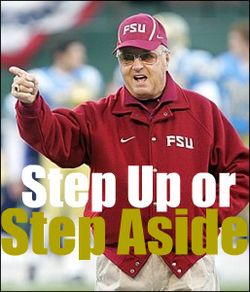 Florida State has not been shy about playing freshmen and sophomores the last two years – in fact no team in college football played more freshmen than the ‘Noles in 2008 - which should pay dividends in 2009 with a deep and experienced team coming back to challenge for the ACC title. Yet, at the same time a rejuvenated coaching staff has picked up recruiting to the point that several true and redshirt freshmen should challenge for playing time this fall. When you have 22 starting spots for 85 talented youngsters it’s a nice problem for the coaches and fans, but it also leads to the awkward situation where an experienced upperclassman can find himself riding the pine behind a relative newcomer. For a perfect example just look at Drew Weatherford, who led the ‘Noles to an ACC Championship and an Orange Bowl appearance as a freshman, only to spend his senior year backing up Christian Ponder and D’Vontrey Richardson. So here’s a quick look at five (well, six) upperclassmen who are in danger of getting Weatherfor’d right out of the lineup if they don’t pick it up this season, and ironically the man who knocked Drew from his staring spot heads the list...

1. Junior QB Christian Ponder – Last year’s challengers have moved on, but that doesn’t mean Ponder has the starting quarterback spot locked down. He’s first-string heading into the season, but Ponder ranked just 86th nationally in Passer Rating last year, threw just 8 TDs vs. 13 interceptions against FBS competition, and struggled all year with intermediate and deep routes. Worst of all, Ponder saved his most abysmal performances for Doak Campbell Stadium where he threw three picks and completed less than 50% of his passes in a loss to Wake Forest, then matched the feat against Boston College (with no TD passes in either game).  And he tacked on two more picks against Florida before getting knocked out of the game. They say the most popular man on a football team is the backup quarterback, and redshirt freshman EJ Manuel is no exception to the rule. Jimbo Fisher’s hand-picked QB of the future, FSU fans have been salivating to see the former 5* recruit in action ever since he became the jewel of Florida State’s ‘08 recruiting class.  Ponder won’t have much time to work out his issues playing at home with Miami rolling into Tallahassee for a Labor Day clash in less than a month, and if he comes through with another 0 TD/multi-INT game you can bet the natives (and maybe Fisher) will get a little restless to see a change under center. 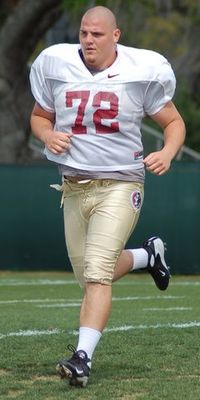 2. Senior DT Budd Thacker – It’s been a long, slow fall from grace for Budd, who was a fan favorite as a freshman after spurning Virginia Tech to come play for the ‘Noles. The FSU faithful loved his heart and hustle, and felt that he could get by without ideal size because he was ‘country-strong’. Unfortunately he never really progressed after that first season and the fans grew increasingly weary of watching him get pushed around game after game, especially as the ‘Noles dropped to 42nd against the rush last season. It also didn’t help that he was one of the first and most prominent team members exposed in the infamous cheating scandal that will likely cost Bobby Bowden wins and landed the program on probation. Already sitting second on the depth chart behind fellow svelte senior Kendrick Stewart, Thacker could see further encroachment on his playing time from promising freshman Demonte McAllister or even sophomore ‘tweener Everette Dawkins. We’ll be pulling for Budd to have a renaissance in his senior season – something that’s certainly not unheard-of at FSU – but so far we’ve seen nothing to make us think it’s in the works. 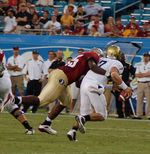 3. Senior DE Kevin McNeil – McNeil’s career has followed an arc similar to Thacker’s; as anyone who saw him play as a freshman could see his outstanding quickness and potential as a pass-rusher. In fact he tied fellow frosh Everette Brown for the lead among FSU defensive ends in sacks that year.  Unfortunately health, legal, and academic issues have dogged the talented defender ever since. Even the fact that he’s a senior is a bit frustrating, since he could have sat out the end of 2008 and come back this year as a junior but opted instead to play (getting minimal PT behind Brown and Markus White) and essentially wasting a year of eligibility.  FSU could certainly use his help this season making up for Brown’s absence, but one has to think Odell Haggins will quickly turn to sophomore Toshmon Stevens or even surprising freshman Brandon Jenkins if McNeil repeats his disappearing act of the last couple season. 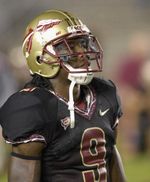 4. Senior WRs Richard Goodman & Rod Owens – Unlike Thacker or McNeil, neither Goodman nor Owens made names for themselves as freshmen with their play (Owens’ dancing is a whole other story). In fact, other than a few notable drops and his involvement in a fight at the Student Union and subsequent suspension for the Boston College loss last year Goodman has been an afterthought for most of his career, and Owens has battled injuries that offset his blazing speed. However, the one attribute they both possess – experience – is the same attribute FSU’s WR corps desperately lacks entering the ’09 season. Both seniors are being looked at to provide leadership and guidance to an exceptionally young group of receivers… but those youngsters are also exceptionally talented.  Goodman and Owens are already behind stud sophs Bert Reed and Taiwan Easterling on the depth chart, and if they don’t find a way to consistently produce on the field they’ll soon find themselves looking up at towering freshmen Willie Haulstead and Rodney Smith, who are both already making noise in practice. 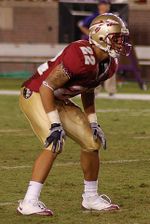 5. Senior SS Korey Mangum – You can’t question Mangum’s effort on the field; but unfortunately anyone who watches him play also can’t help but question his speed. After making the transition from nickel corner to rover – a position that is probably a better fit for his skill set – Mangum is being counted on to make an impact at safety, where FSU was once dominant but has had issues for several years now. Unfortunately for him somebody else has already made an impact there: true freshman Jajuan Harley, who absolutely crushed Summer performance testing and has been impressive so far in practice. Many are expecting Harley to push for starter’s minutes in his first year, and with Jamie Robinson solidifying his hold on the starting Free Safety spot that leaves Mangum’s minutes in jeopardy.