« Seminoles not the only team getting nicked up in pre-season. Or: You can't spell tackle without ACL | Main | Perrilloux out for first game, but back for FSU »

Filling Doak for the biggest home game of
the year: Mission Impossible? 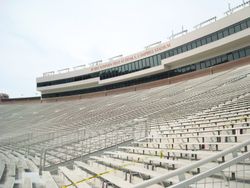 A major FSU fan we know -- he hasn't missed a home game in we can't remember when -- told us about a friend who calls himself a long-time Nole fanatic. Except this guy will be more fanatical about golf than football come Labor Day. He'll be playing in a tournament that day and isn't sure if he can make it to the game that night. The FSU - Miami game. About a three hour drive from the site of the tournament.

Wonder which of the following categories of FSU Fan he falls into?

The Spoiled Fan - Probably a student or recent grad during the Dynasty Days. He or she grew up on legends like Ward, Dunn, Deion and Brooks. They had it so good for so long, they couldn't comprehend the slide that began in 2001. Their expectations are stuck on the high bar set by the Dynasty Teams: 10 wins at a minimum or it just doesn't count. For them, this decade of FSU Football has been like having an ugly wound sutured up: they just couldn't watch.

The Casual Fan - In fairness, many casual fans are victims of FSU's Achilles Heel: lousy geography. Tallahassee is a four (or more) hour drive. That's a big bite out of the weekend, not to mention gas, food and probably a motel somewhere along the way. Hey, why make the effort when most FSU games are as close as their flat screen with 5.1 surround sound? "Dude, it's just too much of hassle to actually make it to Doak." So without the shared communal experience of chopping with 80-thousand like-minded Noles, their connection grows a little more distant every year.

The Disgruntled Fan - Unlike the Casual Fan, these guys actually have strong feelings about the team. Only problem is they're mostly wrapped in negativity, ranging from "That damn Jeff," to "the players are a bunch of thugs" to "blankety-blank Booster contributions," etc., ad infinitum. A subset of the Disgruntled Fan blames Bobby for sabotaging the program. They're like expatriates who flee their country, vowing to stay away until the mean old dictator is displaced.

With fans like these, is it any wonder there'll be empty seats for the Labor Day showdown?

Meanwhile, the reptile faithful will be filling every seat of an even bigger stadium. While many of their fans live within two or three hours of that stadium, there are thousands who'll drive even further to get to games. And pay big booster contributions. And be there even for the three cupcakes UF will play this year.

It pains us to say this, but it's probably safe to say that Tebow worshippers would show up if their team played the Folsom Prison flag football team at 1am on a rainy Tuesday in March.