What part of "Buyer Beware" does Aubrey Phillips not understand? 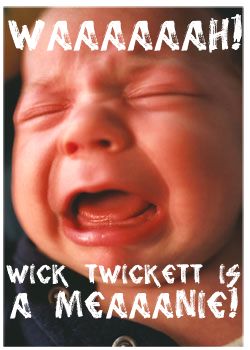 Aubrey Phillips finally opened up about his reasons for going over the wall at Camp Trickett. Monday he told the website Inside The Auburn Tigers:

"I was mistreated and cussed out for no reason every day. I was told I would never play and called an (expletive) every day. He (Trickett) told me I would never play for him. He said he wished he had never signed me and all of that. I tried to put up with it, but it kept going on. He kept calling me a stupid (expletive) and all of that. My leaving had nothing to do with football. I told them I came there to play football, not be mistreated as a person."

We hope Aubrey and Auburn will be very happy together. But Tiger coaches must know they have an unstable young man on their hands. And a pretty clueless one at that.

What part of "Buyer Beware" and "due diligence" didn't Phillips understand when he signed with FSU? How could he not know the fate awaiting him when he stepped on campus?

Even guys who arrive in top shape are destined to go through the 9 Rings of Hell. So Aubrey must have had a death wish to binge on Whoppers 'n fries and show up 40 pounds overweight and out of shape.

Most incredulous of all: Phillips obviously didn't listen when Auburn recruiters must've tried to scare him away from FSU by telling Trickett horror stories from the days the mean Marine coached on The Plains. The best one we've heard goes like this:

Trickett allegedly peed on a football twice before allowing a center to snap the ball because he was "pissed off" at the kid.

So maybe we should thank Aubrey for openly moaning about his brief FSU experience. Any hotshot high school lineman who didn't get the message before certainly will now: Rick Trickett ain't running any sensivity training institute here.