« Former Noles find a home up North | Main | Another day, another rumor that JSU's Ryan Perrilloux won't face the Noles »

Oh, it's the MEDIA that's the problem, not the players. Nice spin, Urban 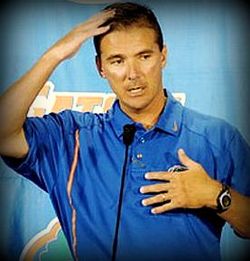 "I know in the media, we've had some issues and as long as it's manageable," he said. "If it's a bad person, we're going to eliminate the bad person. If it's someone that made a mistake like everyone else, then we just have to make sure they don't make mistakes."

Um, we're confused, coach. First you say reptile players are "The top one percent of one percent, " now they're "like everyone else?"

Asked what he looks for in a recruit, Meyer said:

"I think we're just keeping an eye on the target and that's high quality character of people we get into our program."