« That hot air from the South? Just some overconfident Canes already counting the FSU game as a "W" | Main | Only you can prevent forest fires and scenes like this one »

Bulls bringing some baggage to Sept. 26 game at Doak Campbell 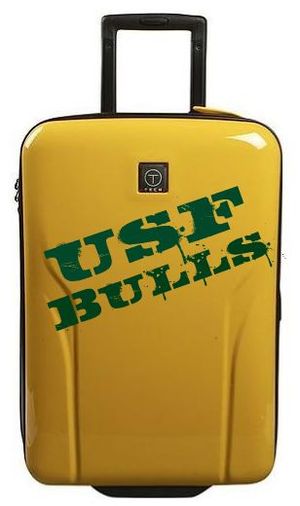 While FSU adjusts to fewer players on scholarship, thanks to Tutorgate, the University of South Florida has the opposite problem: too many players for the allowed number of schollies.

The Sporting New this week slammed USF for signing 29 recruits when it had only 23 scholarships available and now "is in the process of deleting players it finds undesirable."

The story went on to brand the Bulls '09 recruiting effort as "a clear case of a school oversigning rampantly without caring what happens to the kids at the end of the class."

Even before signing day, the Bulls St. Pete Times beat writer sent a clear signal that the scholarship numbers just didn't add up.

Will the Big East now follow the SEC's lead? Ole Miss was dragged through the media mud earlier in the year for inking an amazing 37 kids. It was embarrassing enough to the conference that it recently issued a rule limiting SEC schools to a max of 28 football signees per year. The same story reveals that Troy went the Rebels three better, signing an even more amazing 40 players in February.

More troubling numbers for the Bulls. Out of 119 D-1 football schools, USF is last in the 2009 NCAA Academic Progress Report (APR) that measures eligibility, retention and graduation of jocks in each sport.

Don't hear much about this APR stuff? You will. The NCAA is serious about athletes staying in school and graduating. According to Brett McMurphy, who covers the Bulls for the Tampa Tribune, USF "avoided scholarship losses by applying for an NCAA waiver and received it for a second consecutive year."

And with friends like these... The last thing any teams needs is a hate site. And the Bulls have a doozy. Some blogger is so anti-USF he's posting every bit of bad news that could tarnish the program. For his own safety, he slings that mud anonymously.