« Tribe Transformation: Or how Florida State retooled its recruiting effort after the '07 breakdown | Main | Wanted: University President to boost FSU's rankings (not the ones you think) » 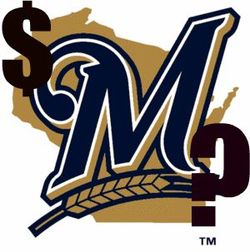 We've been in touch with Milwaukee Brewers media today about the team's alleged $800,000 signing bonus offer to Jacobbi McDaniel. Here are two differing, but interesting, angles from two sources who were asked to confirm the big bucks dangled in front of Jacobbi by the Brew Crew.

First, here's what Tom Haudricort, who covers and blogs about the Brewers for The Milwaukee Journal, had to say:

"The Brewers do not reveal bonus offers, so I can't confirm it. All I can say is it's way, way higher than that round would dictate."

Then we got this revealing response about the $800K offer from Jim Breen who covers Milwaukee for The Sports Bubbler:

"I cannot personally confirm it because it has not been written anywhere or told to me in person, but I know of a Brewers blogger/writer who has talked to McDaniel personally.  McDaniel apparently confirmed that he has received an offer of $800K and is about 50-50 on signing with the Brewers.

The Brewers anted up so much money (if true) for McDaniel because he would have been a much higher selection had it not been for signability concerns.  Teams generally pay prep players over-slot bonuses to compensate for the fact that they would make more money going to college first.

The Brewers are hoping to steal McDaniel away from football with some money.  Ultimately, I believe Milwaukee will not be successful, but you cannot fault them for aggressively pursuing the young man."

Despite Andrew Carter's encouraging interview with McDaniel, $800 Large is a boatload of bucks for a kid from a humble background. Which is why we won't issue an official "Whew" until Jacobbi has unpacked in Tallahassee.