« How much access to FSU athletic department records should the media have? | Main | Where the $800K rumor about the Brewers offer to McDaniel came from »

Tribe Transformation: Or how Florida State retooled its recruiting effort after the '07 breakdown 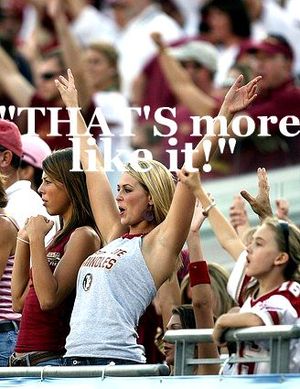 We recently shined a harsh light on FSU's train wreck of a recruiting class in 2007. Out of 20 players signed, eight are gone for various reasons (five were academic casualties, three transferred). Seven are buried on the depth chart. Only five have contributed meaningful playing time so far (four were starters at one time or another in '08).

While you can't give the '07 class a final grade until a few years from now, we'd give it a mid-term grade of D. How did things get so crappy?

Turmoil and turnover. Back-to-back 7 - 6 seasons. All the negative buzz of the Jeff Bowden years. Perceptions of an unstable coaching staff, with four of them out the door. How bad did things get at the Moore Center?

Recruiting offensive stars became a hard sell, according to one source who was inside the program at the time. So the handful of FSU coaches actively recruiting got a little desperate. They took more chances, made compromises on talent and were less concerned about character and academics. But change was in the wind.

For starters, FSU locked in commitments early, instead of keeping them secret til the last moment. Over half the 2008 class was committed six months before signing day. And there was a new emphasis on kids with clean backgrounds and a higher probability of making passing grades.

The contrast between the recruiting classes of '07 and '08 was dramatic.

Only three academic casualties among 29 signees.

Travis Arnold, DB - Enrolled in January at Butler Community College in Kansas. Could find his way back to Tallahassee after graduation.

Anthony McCloud, DT - At Itawamba CC in Mississippi with plans to return to FSU in 2010 after graduating from ICC.

One more who'll play at Doak this fall (just not in Garnet & Gold): Anthony Hill, DT - Rated a three-star by both Rivals and Scout, Hill was apparently an odd man out, what with too few scholarships for 32 commits. FSU coaches reportedly wanted him to be a grayshirt. Hill opted instead for South Florida.

Two who were one and done. Joe Tonga, the California JC product who's now at Indiana University of Pennsylvania, and the ill-fated Corey Surrency.

What a difference a year makes. The '08 class, ranked in the top ten classes by Rivals, included two 5-stars and 13 4-stars. David Spurlock and Andrew Datko were 3-star players who started their freshmen year. Nine '08 signees started or had serious PT their rookie season.

Now that's a productive recruiting class. One that will go a long way in helping fill the void left by the drought of '07 recruits.