« In the spring a young man's fancy turns to free football | Main | "Hail to the orange and blub-blub-blub..." » 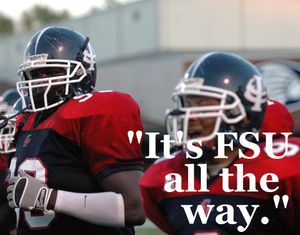 Should Florida State have a down year in 2010 for defensive line recruits, all is not lost. Because if things go according to plan, 2008 signee Amp (AKA: Anthony) McCloud will be back -- older and wiser (Amp is the big guy on the left, no. 99 in the photo above from last season).

Imagine FSU fielding an All-Mac D-Line in 2010, with McCloud joining McCray, McDaniel, and McAllister, and lining up beside DE Kevin McNeil.

For an update on McCloud, we spoke to ICC Head Coach Jeff Terrill.

Coach, how is Amp progressing at Itawamba?
"He's progressing fine. Working hard, seems to be doing well with school, and hopefully he'll finish strong with these exams coming up soon. He's finishing up his spring semester of his first year."

So up until now his grades have been good?
"Yes, he's hanging in there pretty well. There's room for improvement, but he is on task."

ICC recently wrapped up spring practice. What kind of progress has Amp made since fall?
"I'm afraid Amp had some physical problems. He's a young man who's had some high blood pressure. And he had a spell of it during spring practice, so he missed some practice time because of it. But what limited action he saw, we were very pleased with."

Is Amp on medication for his blood pressure problem?
"Yes he is."

And what do you look for from Amp this coming season?

"We really think he can become a great player. Last year he was a part-time starter. Probably started in half the ball games, but played a lot of reps in all games."

How has he developed physically since he got there?
"He runs awfully well -- of course, he was a quick guy to start with. Got an excellent first step. And I guess he's put on some weight. I can't recall what weight he came in at, but he's finishing up spring drills at about 285."

What are some of his other attributes?
"He has a great ball-get off and is a very good penetrating defensive lineman."

Do you think he'll be ready for D-1 football after another season at ICC?
"We certainly think so. The maturity level has really changed. There's a lot of difference between a young man that's been through a college season and one who's just a true freshman. It's just a natural growth process that he's gone through. So he's showing a lot of maturity in handling his business a lot more responsibly."

And no behavior problems or character issues?
"Those are things I wouldn't comment on."

Does Amp have plans to come back to FSU once he graduates?
"It's FSU all the way. That's all he works for everyday."

Finally, does he prefer to be called Amp now, rather than Anthony?
"I don't know what he prefers. I just know around here we call him Amp.