JayGun may be the next Tebow, but he lists FSU first on his list of favorites


JayGun. What a cool nickname for a QB who some predict could be the next Tim Tebow -- if he turns to the dark side. The reptiles offered JayGun (real name, Jamius Gunsby) of LaGrange (GA) High. But he told the AJC in March, “My top six would be FSU, Florida, Oregon, Alabama, Auburn and Georgia.”

The 6-4, 220 lb.Gunsby has the gun, alright (check the video above and here). And he can scoot when needed, punishing players who get in his way. He's also a multi-sport athlete who can slam dunk and run track. 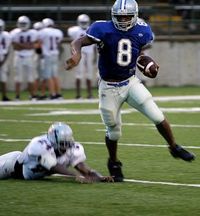 But besides the gator offer, JayGun is off the recruiting radar. He's unrated by both Rivals and Scout. So why would a big, talented QB from a very good program be overlooked?

A red flag from last season. One reason is that coaches haven't seen that much of JayGun. He only played the first six games of last year's schedule before being suspended for "a violation of team rules." Because LaGrange went deep into the Georgia playoffs, Gunsby missed nine of the team's 15 games.

Whatever JayGun's problems in 2008, it looks like Granger Coach Steve Pardue has wiped the slate clean. Gunsby is back and practiced hard in spring drills. If he comes out smoking this fall, he'll have a ton more offers before the leaves fall. Will that include one from FSU?