How long will FSU pay the price for the worst recruiting year in recent history? 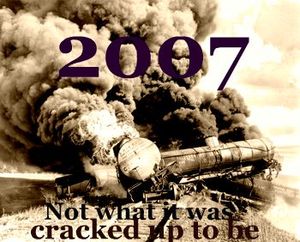 It was the end of the Jeff Bowden era. Florida State had muddled through its second straight 7 - 6 season. And the malaise showed in the 2007 recruiting class (ranked an underachieving 21st by Rivals).

In fact, 2007 may be FSU's worst class ever in terms of players who actually made a meaningful contribution. With the way things turned out, maybe it's good the Noles only had 20 scholarships to give.

Due diligence? More like doo-doo diligence. While lousy luck and injuries played a part, some of the blame has to go to the coaches. They simply failed to do their homework in sizing up most of the kids who signed Florida State LOIs. Either that, or they took a chance on too many of those 20 signees.

Successful recruiters use three main criteria to evaluate high school players. Sure, talent is far and away number one. But grades and character are vital to ensuring that a kid will qualify, make passing grades and stay out of trouble. If any of those three are out of whack, a school is taking a gamble.

So let's take a look at all 20 players from the class of '07 and where they are today.

Anthony Grosso, OL - Reported in the fall but bolted after he got a taste of new OL coach Rick Trickett's school of hard knocks. Moved on to Delaware, where he's no longer on the roster.

Brian Coulter, DE - Academic non-qualifier from JC. Accepted at Missouri where he had 13 total tackles and 16 assists, including 3 sacks, last season. Will be a senior at Mizzou this fall.

Zach Hillery, OL - Academic non-qualifier. No word on where he ended up.

Will Furlong, OL - Quit the team this year due to injuries and inability to gain weight.

Maurice Harris, LB - Under-sized but moved up to 2nd on depth chart at Sam.

Cameron Wade, WR - Only three catches to date. On thin ice after dust up at the union last fall, then failing to make a court date in April.

That's right. To date, only five guys from the Class of '07 have hit the starting lineups or played substanial minutes. And that's a bit of stretch since Greenlee played sparingly last year as a back up for Zebrie Sanders.

Bottom line: A class with this many casualties and underachievers is something no team can afford. Especially not one that's about to lose five scholarships in the next few years.

Next:  Positive changes from the train wreck of 2007.