« By keeping FSU players waiting by the phone, the NFL sends a message | Main | What do Paris Hilton and FSU Football have in common? (Seriously) » 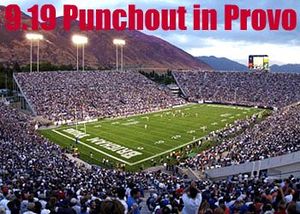 Like FSU, BYU also has a huge opener (Oklahoma) followed by a game they should win (Tulane). Then, in game three, the Noles and Cougars face off in Provo. As part of our early bird preview series, we check in with Jay Drew, who covers BYU for the Salt Lake Tribune and writes the Cougar Blog.

Last season BYU finished in the middle of the pack in D-1 total defense. Will they improve on that this year?
BYU went to the junior college ranks, which it rarely does, to get some instant help on defense. They are especially thin at cornerback and outside linebacker. Both safeties graduated, but they are pretty high on the two guys who will fill in there, Scott Johnson and Andrew Rich.

The strength of the defense will be at defensive line, where all three starters are back (BYU runs a 3-4 defense).

Why did Cougars cancel their spring game?
The playing surface (natural grass) at LaVell Edwards Stadium is 20 years old, and it has a rather noticeable crown in the middle. So, they tore up the grass, leveled the field a bit, and put down new sod. Because of the long and harsh winter we've had here, it wasn't ready in time for the spring game. BYU coach Bronco Mendenhall said it would not have been appropriate to hold the traditional game in another school's stadium.

Do opponents from outside the Mountain West struggle in Provo's thin air (about 4,500 feet above sea level)?
Most teams that have visited the past 10 years (Syracuse, Boston College, Notre Dame, Georgia Tech, Tulsa) have gone away saying they didn't think it was that big of a deal. Most have chosen to ignore it, in terms of preparation. It seems like basketball teams have been more affected; last winter Wake Forest played in Provo and several of its players mentioned they found breathing a bit more difficult and they tired a bit earlier than normal.