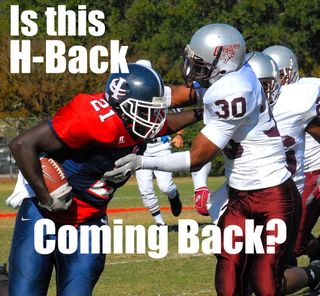 Debrale Smiley from Thomasville was a heralded RB commit for the Noles in 2008. But academics caused a detour to Itawamba Community College in Mississippi. For an update on the big guy who could add zip to FSU's 2010 offense as a multi-tasking H-Back, we talked to Jeff Carter, ICC's offensive coordinator.

"He's doing well in the classroom. He's shown discipline and done well getting all his grades. He's already taken all the toughest class work. We're making out his schedule right now, and hopefully he'll be done here next December.

"He did well on the field, too. He played running back, tight end and H-back for us. He had a couple of games that he was really the big difference in. But we had other running backs last year, and we tried to give 'em all the ball. So he wasn't the primary running back every game, being a freshman and since we had a couple of sophomores we were trying to feature. "

Will he be your feature back this fall?
"Yeah, he sure will. We're looking for big things out of him. And he's versatile and able to play a lot of special teams, too. He's a pretty good athlete to be so big."

Does he like to run around people or run over them?
"He can do both. He can make them miss -- I've seen him hurdle some kids -- and I've seen him run slap over them, as well. He's going to be hard to defend."

How about catching the ball. Does have good hands?
"He does, especially for a big guy. We used him at tight end some and as our H-back, which is kind of a versatile fullback. He did anything we asked of him. He's very unselfish."

You just wrapped up spring practice. How did he progress?
"He showed signs of getting better -- on and off the field. He's real mature for his age. He's got a family and he tries to take care of them, work, and go to school."

Finally, do you believe Debrale plans on coming back to FSU?
"I do, I sure do. He's definitely a fine running back and he'll do well back at Florida State."