« Boise? Wisconsin? Taco Bell Arena? Hey, it beats the heck out of the NIT | Main | Are you counting on the Noles in Boise, or counting them out? » 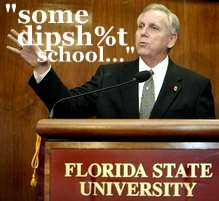 Did you catch T.K.'s act this morning? In a rambling and at times incoherent press conference announcing FSU's appeal to the NCAA he referred to a "dipsh*t school" (Andrew Carter has details here).

Yep, he said the word that might be okay when talking to boosters in hushed tones. But for a university president -- YOUR university's president -- in a very public spotlight, it's unforgivable.

Way to represent Florida State, pal. Way to kill not only your credibility, but detract from any serious argument FSU has to win its appeal to preserve those wins in football.

We heard T.K.'s slip. And though we're certainly no prudes, we were embarrassed. Especially since, as the picture shows, the school's name is so prominent on the podium. And get ready for all the snickers from friends and co-workers when it hits YouTube.

Unlike some sites, we haven't been on the warpath questioning T.K.'s ability to run our alma mater in an effective and professional manner. We will be now. This guy has got to go.