« Bill from Tampa silences a Carolina fan | Main | Boise? Wisconsin? Taco Bell Arena? Hey, it beats the heck out of the NIT » 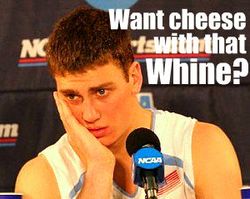 Some might call FSU's win a David and Goliath thing. No way.

This year's Noles can't be symbolized by a skinny kid with a slingshot and great aim. Older fans will tell you it's the best team since Hugh Dawon's '72 Cinderella squad that went all the way to the title game against the legendary John Wooden and his Bill Walton-led Bruins.

Do Toney Douglas & Company have the mojo to take down their second big challenge in as many days? They certainly have the confidence, a theme that ran through post game comments.

Toney Douglas: "We came a long way since the pre-season, with six new guys coming in. But I think we're still hungry. We're never satisfied."

(On his ability to get hot when it counts)
"My teammates always say it's Tony Douglas time, it's TDT."

Leonard Hamilton: "I think Tony is the poster child for hard work and dedication, and the old adage that basketball players are made in the summer. When you take as many shots as he takes in the Summer, in the gym by yourself, you have a certain level of confidence that when you get an open look you feel like it's going in."

"In the second half, I thought we got good shots. Some of them just didn't fall. But what made the difference is that we got the stops in the period of time that we had to get the stops...And we're very fortunate today that we made the plays when the game was on the line."

Derwin Kitchen on his free throws with 15 seconds left: ''I knew if I made both of them they were going to have to get a 3-pointer. Man, I was holding my breath. Please go in! Please go in!''

A tired Tyler Hansbrough: ''I don't really know what happened. It was just crowded under there."